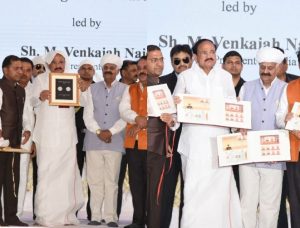 Naidu was also appraised of the proposed works for the revitalization of the memorial.

“Paying tributes to martyrs of #JallianwalaBagh by placing a wreath on the memorial on 100th anniversary of Jallianwala massacre, the darkest chapter of British rule. On this day, 100 years ago a peaceful gathering was fired upon, leaving several hundred dead & many more wounded,” Naidu said.

Jallianwala Bagh was a reminder to each one of us as to how hard-won & precious our freedom is. Naidu said that it was an occasion to shed a silent tear for each of the innocent Indians who lost their lives that Baisakhi day in 1919 and a poignant moment of reflection on colonial cruelty & irrational anger.

Naidu said through social media that the pain and agony continue to rankle in the hearts of every Indian to this day even though 100 years have lapsed since that inhuman massacre happened. ‘History is not a mere chronicle of events. It shows us the depths to which depraved minds can plunge and cautions us to learn from the past. It also tells us that the power of evil is transient.’, he said.

Naidu called on his fellowmen to draw lessons from history and work to shape a better future for humanity. He spoke about the need for the world community to come together to promote everlasting peace in all the corners of the globe and ensure that sustainable development of the planet becomes the watchword at all times and at all levels from schools to summits of global leaders.

‘Progress cannot be achieved without peace’, he affirmed and called upon world nations to establish a New and Equitable World Order where the power and responsibilities are shared opinions and voices are respected and wealth and earth’s resources are shared.

‘This is a day that reminds us of the indomitable human spirit that braves the fury of fusillade of bullets and ultimately keeps the flag of freedom and peace high. It is a timely reminder to each one of us as to how hard-won and precious is our freedom. Today is an occasion to shed a silent tear for each of the innocent Indians who lost their lives that Baisakhi day in 1919’, he said.