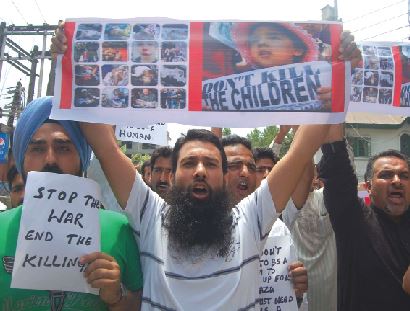 As hostilities broke out between Israel and Palestine, Kashmir once again witnessed protests against the Jewish country, unlike the overwhelming support for the bombing of Gaza among a large section of the population across the country. The administration, however, was quick to put down the simmering anger lest it led to eruption of anti-New Delhi protests as has been the case in the past.

During 2014 Israeli raids on Gaza, a teenage Kashmiri boy Suhail Ahmad was killed during the police action against the protesters. The Class nine students had received a serious bullet injury in his chest and was brought dead at the hospital. The protests had continued for days after the separatist groups had called for strikes.

But this time the anger largely remained subdued after the government took harsh measures to bar its visible demonstration. A religious preacher Sarjan Barkati was detained two days after he prayed for Palestine. According to his family,  Barkati had delivered a sermon on Eid in his South Kashmir village Reban for the first time after his release last year. Barkati had been detained in the wake of the withdrawal of Article 370 in August 2019. He was in jail for over a year.

More shockingly, however, the police also arrested a graffiti artist Mudasir Gull, 32, for painting a mural in support of Palestine. The art showed a woman sobbing with her head wrapped in the Palestinian flag. The graffiti read “we are Palestine”. It later went viral on social media. The family of Gull accused the police of curbing freedom of expression.

Talking to the media, Gull’s sister Muzamil Firdous said the government was trying to ban the art too in Kashmir.“My brother has done nothing wrong. Why was he detained?” she asked.

But the police had its own reasons for banning any form of solidarity with Palestine. In a statement, the police warned against any street protests, saying it was keeping a close watch on elements “who are attempting to leverage the unfortunate situation in Palestine to disturb public peace and order in the Kashmir Valley”.

“We would not allow cynical encashments of public anger to trigger violence, lawlessness and disorder on Kashmir streets,” the police in the statement.

Since the revocation of Article 370 J&K administration has been paranoid about the prospect of a mass scale protest in Kashmir. Any form of public expression that is expected to lead to anti-New Delhi protest is put down with a heavy hand.

Over the last two years an uneasy peace has held in Kashmir. A very critical factor in this state of affairs, besides the post Article 370 siege, has been the successive Covid-19 lockdown in the Valley over the last year. This has largely confined people to their houses as elsewhere in the country. The restrictions, in turn, have closed down businesses, crushing all-important sectors like tourism and hitting horticulture hard, both mainstays of the Kashmir economy. This has rendered thousands of people jobless. Politics as a result has taken a backseat while tough government measures have ensured that any undercurrent of tension is nipped in the bud.

When hostilities between Israel and Palestine broke out in the second week of May, and the reports of the bombings on Gaza and the consequent casualties flowed in, Kashmiris too started showing solidarity with Palestinians. Social media was full of pro-Palestine posts just as elsewhere in India pro-Israeli hashtags were trending.  “We see the pro-Palestinian protest in Kashmir as a separatist protest in disguise,” said a police officer on the condition of anonymity. “And we couldn’t have allowed it”. 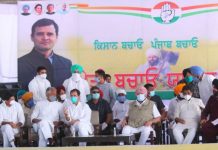