At least four people were killed and six others were left injured after a car in which they were travelling met with an accident in Uttarakhand’s Uttarkashi district.

Police and State Disaster Response Force (SDRF) were present at the spot. All injured passengers have been admitted to district hospital.

More details are awaited in the accident.

On September 3, thirteen people were killed when a Tempo Traveller fell into a 200-meter gorge in Uttarkashi.

The vehicle, which was ferrying 15 people, fell into the gorge as the driver lost control over it following a landslide which brought a heap of debris on the road. 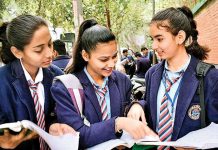