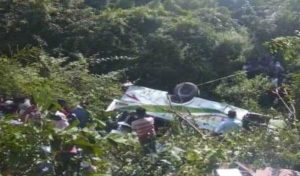 Five persons were killed and 21 others were injured after a bus fell into a 50-feet deep gorge in Almora district of Uttarakhand on Thursday.

As per reports, the bus which belongs to Garhwal Motor Owners Union (GMOU) had around 30 persons in all, including conductor and the bus driver.

Senior officials reached the spot to oversee rescue and relief. The injured were immediately admitted to hospital for treatment but condition of 14 injured were stated to be critical, official said.

As per the reports, the accident appears to have taken place due to brake failure.