In a shocking incident, two people were shot dead and two others seriously injured after miscreants opened fire at a shopping mall in Varanasi’s Cantonment area on Wednesday.

According to the sources, the incident happened inside a garment shop at the JHV Mall where an argument broke out between a salesperson and those accused over the rate of discount.

As the argument became heated, the accused opened fire at showroom staff killing the two men and injuring two others. However, the accused managed to flee the area.

The injured, were immediately admitted at a hospital, where their condition was said to be critical.

Police officials reached the spot to take stock of the situation and cordoned off the area.

Police said that they were questioning those present at the spot during the incident and examining CCTV footage. 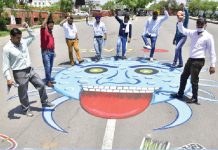