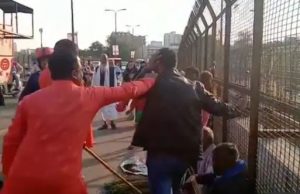 Two Kashmiri dry fruit vendors on Wednesday were attacked by a group of men on a busy road in Uttar Pradesh’s capital Lucknow.

A group of men belonging to a fringe right-wing outfit also filmed the assault. One of the men had shared a video of the assault on social media.

According to media reports, the incident took place at 5 pm yesterday in Daliganj in central Lucknow.

In a video of the attack, which is being widely shared on social media, two men in saffron kurtas were seen thrashing one of the vendors.

One of the attackers was seen beating the man with a wooden stick. However, several local residents of Lucknow came to the rescue of the dry fruit sellers and stopped the men from assaulting them.

The incident was reported to the local police after the video of the attack went viral on the social media late on Wednesday night.

The former chief minister of Jammu and Kashmir Omar Abdullah tagged Prime Minister Narendra Modi on twitter and tweeted, “Dear PM @narendramodi Sahib, this is what you had spoken against & yet it continues unabated. This is the state governed by your handpicked Chief Minister. Can we expect action in this case or do we file your concern & assurances as a jumla, meant to placate but nothing more?”

“Nothing will do more damage to the idea of India in J&K than videos like these. Keep thrashing Kashmiris like this on the streets at the hands of RSS/Bajrang Dal goons & then try to sell the idea of “atoot ang”, it simply wont fly (sic),” Omar added.

Omar questioned Union Minister Rajnath Singh, “Jenab @rajnathsingh Sahib. You represent this constituency in the Lok Sabha, this is the constituency where Vajpayee Sb was elected from & went on to be PM. If no one else will step in & deliver justice can we expect you to punish those guilty of this assault?”