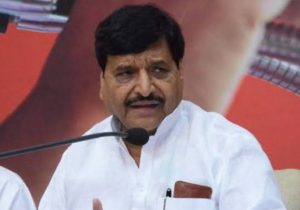 Shivpal Singh Yadav, chief of the Pragatisheel Samajwadi Party (PSP), had announced on Saturday that he would be contesting the upcoming Lok Sabha election from Firozabad in Uttar Pradesh.

The current MP from Firozabad is Akshay Yadav who is son of Shivpal Yadav’s estranged cousin Ram Gopal Yadav.

Shivpal said he was forced to form his own party after being sidelined by Akhilesh Yadav, the former Chief Minister of Uttar Pradesh.

Shivpal also took potshots at Akhilesh and BSP supremo Mayawati who recently entered into alliance and said how the SP chief refers to Mayawati as bua, neither he nor his elder brother Mulayam Singh Yadav ever considered Mayawati ‘sister’.

Shivpal further asserted that the next government at the Centre cannot be formed without the support of his party.

In the upcoming Lok Sabha elections, the SP and the BSP will contest on 38 seats each in Uttar Pradesh.