Uttar Pradesh Chief Minister Yogi Adityanath on Tuesday completed two years in office and said the state had not seen a single riot after the Bharatiya Janata Party (BJP) came to power.

He further said the state had witnessed hundreds of communal riots during the last regime of Samajwadi Party (SP) but in the last two years there has not been a single communal incident.

Adityanath thanked the Centre for extending their full cooperation in the development of the state.

He also stressed that the Congress, which ruled Uttar Pradesh for the longest time since independence brought the state under the BIMARU (sick) category, forcing youths to migrate in search of employment.

Adityanath said that the BJP government has ensured corruption-free governance with law and order in control, as compared to the Samajwadi Party and Bahujan Samaj Party (BSP) governments and his two-year government had shown zero tolerance towards crime and criminals. 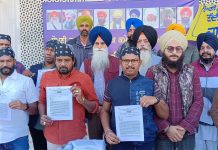