The controversial US withdrawal from the 2015 Iran nuclear deal has for the first time caused a huge gap between Washington and its European allies — the UK, France and Germany — which were signatories to it besides the European Union (EU), China and Russia. The Donald Trump administration’s decision has exposed the US as an undependable nation, which can disown any commitment made to the international community when it comes to protecting its global interests, seen differently by a new administration. The European allies of the US have declared that they will do all that is required to save the deal, also called the Joint Comprehensive Plan of Action (JCPOA), and China and Russia are as strongly supportive of the JCPOA as they were when it was signed during the days of the Barack Obama administration. Yet President Trump has gone for disowning the deal, which, in his opinion, was clinched with most of its terms and conditions favouring Iran. He now wants it to be renegotiated which is not acceptable to Iran.

It was a major achievement for the Obama administration in the sense that Iran got barred from producing the ultimate weapon, the primary objective of its nuclear programme. The deal was hailed by the international community as it had ensured that the balance of power in West Asia would remain undisturbed. The reformist Hassan Rouhani government in Iran accepted the nuclear deal as the JCPOA was designed to boost the country’s economy, reeling under economic sanctions imposed by the US, the UN and the EU. Iran was given an opportunity to choose between the nuclear weapon and economic advantages, and it preferred the first option.

Iran, of course, abandoned its nuclear bomb ambitions but not forever. The deal did not have arrangements for getting Teheran’s nuclear programme fully capped. It was agreed that Iran would be allowed to enrich uranium to a certain grade on its territory, though several UN Security Council resolutions were against such an activity owing to Iran being a signatory to the Nuclear Non-Proliferation Treaty (NPT). President Obama had committed to arranging a repeal of six major Security Council resolutions against Iran. It was also agreed that Iran would be allowed to keep much of its nuclear infrastructure intact. The deal with Iran did not prevent it from continuing with its research and development projects on advanced nuclear technology like that related to centrifuges. Iran was left to remain at least 12 months away from assembling a nuclear bomb if it decided to walk out of the JCPOA.

Iranians proved to be smart negotiators as they got more than what they agreed to forego. President Obama was in a hurry because of the fast approaching US Presidential elections and, therefore, conceded whatever he could to make the Iranians sign the deal. It suited the reformist Rouhani government, too, as the economic advantages that would accrue from the nuclear agreement were needed to control the price rise, promote the export of oil and gas and generate considerable employment opportunities to contain the people’s growing anger against the then government. The conservatives or anti-reformists in Iran denounced the deal but they could not stop it as it was the need of the hour for Iran.

As projected by the Rouhani government, Iran’s coffers began to swell with oil and gas revenues rising fast and steadily. As a result of the JCPOA, Iran had its frozen assets, estimated to be between $100 billion and $150 billion, available to it. Besides this, the lifting or suspension of sanctions in 2015 by the US, the UN and the EU led to an upswing in its oil exports — from 1million barrels to 2.5 million barrels a day. Iran now was financially well placed to drastically increase its spending on armed forces and intensify its overt and covert activities in Syria, Iraq, Lebanon, Yemen and Bahrain to the chagrin of the US allies in West Asia. According to one estimate, Iran has been spending between $6 billion and $15 billion annually to help its Syrian ally President Bashar Al-Assad defeat or eliminate his enemies in the ongoing civil war there. The pro-Iranian Hezbollah militia based in Lebanon has also been getting substantial financial and other kinds of assistance from Teheran for fighting on the side of the Damascus regime, which remains discredited in the eyes of its own people.

The US and its allies in West Asia, perhaps, never imagined that the nuclear deal would ultimately enable Iran to play more effectively the power game in the region to harm the interests of the countries which have always depended on the US to help them sustain themselves. Surging oil revenues have enabled Iran to openly come to the rescue of its friends in West Asia. Russia, too, has got involved in the region militarily as an ally of Iran on the pretext of having been invited by the beleaguered regimes to silence their opponents.

The aftereffects of the US withdrawal from the Iranian nuclear deal have unnerved Teheran in two ways despite the efforts to save the JCPOA by its signatories other than Washington. The anti-reformists, the conservatives, in Iran are upbeat as they now proclaim that their viewpoint — that the US cannot be trusted — as expressed during the negotiations for the controversial deal has been upheld. Under the prevailing circumstances, President Rouhani’s troubles are bound to increase manifold. The pressures mounting on him may lead to his removal from power sooner or later. Thus, the US decision is a major setback for the reformist movement in Iran. It is going to suffer the people’s wrath as the revival of US sanctions will affect the Iranian oil and gas exports considerably, leading to a substantial decline in its export revenues.

Iran, too, is going to hit India hard and in various ways. Iran is the third biggest oil supplier to India after Saudi Arabia and Iraq. India’s oil import from Iran was expected to double to about 396,000 bpd (barrels per day) in 2018-19 from about 205,000 bpd in 2017-18 after Iranian President Rouhani’s visit to New Delhi in February.

India’s relations with Iran may suffer a setback as New Delhi may find it difficult to honour its commitments on the Chabahar port project. Its total commitment for Chabahar port stands at $500 million which can go up. Last year, India sent a wheat consignment of 1.1 million tonnes to Afghanistan via Chabahar, but the US took a lenient view of it. The US now is unlikely to react the same way to any such activity involving Iran. There are some regional blocs in which India is involved along with Iran like the Shanghai Cooperation Organisation (SCO). India along with Pakistan will formally be inducted into the SCO next month, and there are reports that Iran too will be provided the SCO membership this year with Chinese help. Once Iran gets entry into it, the SCO may be treated as an anti-US regional grouping. Obviously, India will not feel comfortable in it, given the growing interest of Washington in New Delhi. 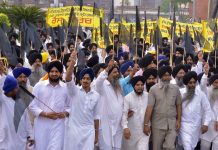 Punjab politics hots up over SIT report on sacrilege incidents