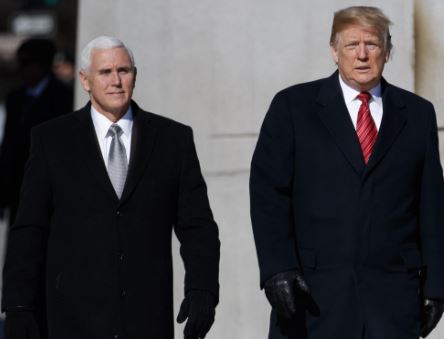 US Vice President Mike Pence on Tuesday told House leaders that he does not support invoking the 25th Amendment process to remove Donald Trump from power.

“With just eight days left in the President’s term, you and the Democratic Caucus are demanding that the Cabinet and I invoke the 25th Amendment. I do not believe that such a course of action is in the best interest of our nation or consistent with our Constitution,” Pence wrote to House Speaker Nancy Pelosi, referring to the process that would declare  Donald Trump incapable of executing the duties of his office, after which the Vice President would immediately exercise powers as acting President.

Pence encouraged Congress to avoid actions to further divide and inflame the passions of the moment. He said that it is time to unite our country as we prepare to inaugurate President-elect Joe Biden as the next President of the United States.

Trump, who is already scheduled to leave office on January 20, is on the verge of becoming the only president in history to be impeached twice.

Nancy Pelosi on Sunday said that the Democrats would move to impeach President Donald Trump from office after his supporters stormed the Capitol building in Washington DC.

“In protecting our Constitution and our Democracy, we will act with urgency, because this President represents an imminent threat to both.  As the days go by, the horror of the ongoing assault on our democracy perpetrated by this President is intensified and so is the immediate need for action,” Pelosi had said in her letter.

Last week, the violence erupted at the Capitol as thousands of Trump supporters stormed the building to protest the Electoral College vote, forcing lawmakers to evacuate the Capitol.