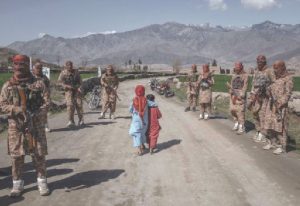 With the US presidential elections barely a few weeks away, the Trump administration is keen to show a spectacular achievement in the withdrawal of its forces from Afghanistan. Is it possible? What could be India’s role in the country? The US policy makers have made it clear that India has to play “a bigger strategic role”, but with growing challenges facing with her northern neighbor, China, the Indian policy makers’ choices are limited. In this context, the visit of the US Special Representative for Afghanistan and Pakistan (SRAP), Zalmay Khalilzad, to Pakistan and India, appears to be his last diplomatic attempt to usher in peace and reconciliation in Afghanistan. Khalilzad, since his appointment in 2018, has succeeded in bringing Afghan Talibans to the negotiating table, but he has failed to get Pakistani support.

There are no straight lines in any diplomacy or in strategic affairs. The Afghan affairs, where the world powers, USA, Russia and China, have both strategic as well as economic interests, are further complicated with the never-ending fratricide risks. Earlier, during the Taliban years, Pakistan was liberally funded from US and the western powers to raise the Islamic Jihadis to oust the Communist rule in Kabul. The country witnessed unprecedented bloodshed. The Communists were toppled, but the new intolerant Pakistani-sponsored Taliabnese or Jihadi regime continued their violence against the different ethnic groups.

The pro-democratic government at Kabul received support from the northern alliance comprising China, India, Iran and Russia. The Talibans could set up their headquarters at Kandhar, with the support of Pakistan’s Jihadis or non-state players. They were groomed and trained in its nurseries. They  also penetrated in India and tried to destabilize pre-dominant Muslim areas of Jammu and Kashmir and other Muslim pockets in India. In spite of the apathy of common Muslims towards these Jihadis, Pakistan’s armed forces and its intelligence, the Inter-State Intelligence (ISI), could set up sleeping cells in various cities across India.

The US policy towards these Islamic terrorists changed following the Jihadis attack on the US installations on September 11, 2001. It brought a paradigm change in the US policies in the region. The then Pakistani dictator, General Pervez Musharraf, joined the US-led war against terrorism, but it was a classic case of double-cross. Pakistan continued to train Jihadis, hid them in its secret hideouts of cantonments, while receiving liberal economic and military assistance from the US.

The issue is whether Zalmay Khalilzad could persuade the Pakistani establishment, the army and the ISI during his visit to Islamabad during the third week of September. It was soon followed to his visit to New Delhi asking more and more involvement in the Afghan peace process. Before the US envoy’s visit, the two top Indian leaders, the defense minister Rajnath Singh and the minister for the external affairs, S. Jaishanker, had discussed their respective counterparts in Iran. It is possible that India may ask the US envoy to dilute its aggressive postures against Iran for a stable peace in the country.

Earlier, the US has already appreciated India’s contribution towards economic development of Afghanistan. During the past two decades, India has provided financial assistance to the war-ravaged country to the tune of two billion US dollars. She allowed a large number of Afghan refugees to stay in India, get education and training to be empowered to serve their country in different fields. India also helped in the construction of highways, hospitals, schools and even the new building of parliament in Kabul. Alice Wells, erstwhile US principal deputy assistant secretary for south and central Asia, had told an Indian journalist that “a healthy Afghanistan is going to need to have a healthy relationship with India”.

She also indicated that the Talibans should also be made a part of the government. However, Alice’s claim appears to be too optimistic that US has already built a “solid cooperation” with Pakistan on bringing Taliban to the table for talks, and Pakistan has also taken action against terror groups and arrested Lashkar-e-Toiba chief Hafiz Saeed. However, Khalilzad has justified the US-Taliban deal signed in February this year that it was in the line with the president Trump’s policy announced in 2017 that the solution of Afghanistan lies via political dialogue and not on the battlefield.

The troops pull out from the country depends upon the situation on the ground. The issue is whether Pakistan would abide by the US advice to take action against the terrorists’ outfits on its soil, and India would offer development assistance. Also, how the peace could be really possible without active support of Iran?

During the post-Taliban years, the relations between Pakistan and Kabul government have soured. The Pakistan’s ISI wants to have a government in Kabul under its umbrella. However, it is not even acceptable to the Afghan Talibans as well as to the Kabul Government. The Afghanistan leadership has demanded that the ISI must end the practice of picking up young men from the Afghan refugees. These trained militants are being deployed to maintain its hold on the country. There is a recent upsurge of these elements in Afghanistan, which could be traced to the ISI. The recent arrest of the terrorist having its close affiliation with ISI in killing Sikhs at a Gurdwara in Kabul has exposed the dirty game of Pakistan.

The role of China in the Afghan affairs is yet to be spelt out, though it appears to be limited only to extract minerals and raw materials. Its recent agreement with Iran for a long-term purchase of the crude oil, reveals that it may be playing much bigger role with the help of its ally, Pakistan, as soon as US vacates the region. Meanwhile, much significance is attached to the earlier two high-level meetings between Rajnath Singh and Jaishanker with their respective counterparts in Iran, Brigadier General Amir Hatami and  Javed Zarif.

It is possible that India may share the common approach towards the resolution of the Afghanistan’s challenges with the US envoy. India may tell US that with the final departure of the US forces, a consensus is required for ensuring the peace. Since, it is yet to be ascertained that how much understanding could be developed between the Indian and Iranian leaders. However, it is understood that India is going to tell US to support India’s initiative for the revival of the regional approach model involving India-Iran to stabilize Afghanistan.

Amidst these developments, India and Iran have decided to give a push to connectivity projects. The terminals built at Chabahar Port with India’s assistance recently witnessed cargo movement to South Asia and Southeast Asia. In February 2019, the Afghanistan-Iran-India trade corridor through Chabahar Port was officially inaugurated. India’s has impressed upon Iran that it should reconsider the Chahbahar-Zahedan railway contract to Khatam al-Anbiya, a Revolutionary Guard entity that is under US sanctions. If the US endorses India-Iran understanding, its task to pull out from Afghanistan would be much easier.  Zalmay Khalilzad’s New Delhi visit could become a historical event, but much depends upon the US perception of the region.