The US has suspended $ 255 million military aid to Pakistan for now, confirmed the White House, saying the fate of such assistance will depend on Islamabad’s response to terrorism on its soil.

The decision came following the tweet from US President Donald Trump on the first day of the New Year 2018 where he accused Pakistan of hoodwinking the US with “lies and deceit” in return for “33 billion dollars aid for over 15 years.”

“United States has foolishly given Pakistan more than 33 billion dollars in aid over the last 15 years, and they have given us nothing but lies & deceit, thinking of our leaders as fools. They give safe haven to the terrorists we hunt in Afghanistan, with little help. No more!” tweeted Donald Trump.

Reacting to the US allegation, Pakistan Defence Minister Khurram Dastgir-Khan also took to Twitter to reply, “Pak as anti-terror ally has given free to US: land & air communication, military bases & intel cooperation that decimated Al-Qaeda over last 16yrs, but they have given us nothing but invective & mistrust. They overlook cross-border safe havens of terrorists who murder Pakistanis.” 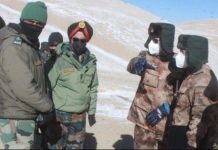 Chinese aggression another reason to strengthen India-US ties: US lawmakers