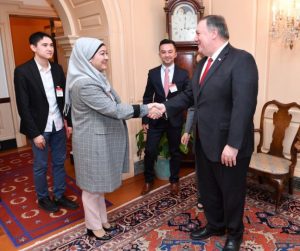 United States (US) Secretary of State Mike Pompeo on Wednesday denounced China’s “shameful hypocrisy” over its treatment of Muslims as he met a survivor and relatives of prisoners who recounted abuses as part of Beijing’s widespread detention of its Uighur minority.

“Met with survivors and family members of China’s campaign of repression and mass detention against #Uighurs, ethnic #Kazakhs, and other members of minority groups in #Xinjiang. I call on China to end these counterproductive policies and release all arbitrarily detained,” Pompeo tweeted.

“China has detained more than one million #Uighurs, ethnic #Kazakhs, and other #Muslim minorities in internment camps in #Xinjiang since April 2017. The U.S. stands with them and their family members. China must release all those arbitrarily detained and end its repression,” Pompeo said.

He further said, “The world cannot afford China’s shameful hypocrisy toward Muslims. On one hand, China abuses more than a million Muslims at home, but on the other it protects violent Islamic terrorist groups from sanctions at the UN.”

On Tuesday, the top US diplomat met Mihrigul Tursun, a Uighur who has spoken publicly in the US about what she said was widespread torture in China’s prisons for the minority group.

According to the State Department, Pompeo also met with three other Uighurs whose relatives are held by China, which according to a UN report has detained a massive one million Uighurs as it seeks forcibly to integrate the minority group.

While speaking to reporters on Tuesday, Pompeo said that “certainly” at least hundreds of thousands of Uighurs had been detained.

“We’re working to convince the Chinese that this practice is abhorrent and ought to be stopped,” Pompeo added.