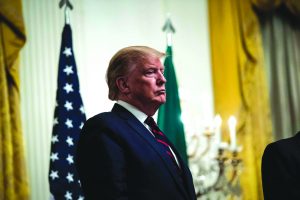 It is too early to forecast that Donald Trump’s political aggressive posture may not lead him to success in the coming months. However, it goes to the credit of Trump that he could optimize the prevailing far-right xenophobia and extremism among the common people of USA during the presidential campaign in 2016 for reaping political harvest. He was able to trounce much more brilliant political leader than him, Hillary Clinton, a Democrat nominee, in the election. He could achieve this, maybe, because the Democrats, could not muster adequate political strength to counter Trump’s slogan, “Make America Great Again” (MAGA), he used in the 2016 election campaign. However, it differed with Ronald Reagan’s campaign slogan, “Let’s make America great again”, which had helped him to win the 1980 presidential polls. Reagan’s campaign did not trigger off suspicions, apprehensions and fear psychosis among a large number of non-white population. On the other hand, Trump supporters are claiming that due to the aggressive nationalistic posture of the president, China and North Korea are now forced to toe the American line, though it is far from truth.

The world is going to witness much more slogan mongering in the coming months. The early three months will be crucial not only for the American politics, but will also determine the role US may like to play in the global power play.  During the past four years, the issue of the alleged Russian interference  in the US polls, and now the reported efforts of seeking Ukraine’s support for the re-election of President  Donald Trump. The allegations and counter-allegations have so much pronounced that the Donald may soon be facing impeachment. The preliminaries for impeaching him are in the final stages. Trump now joins the select group of the American presidents, who were fired or faced impeachment for misusing the highest office of the land. Earlier, Andrew Johnson and Bill Clinton were impeached in 1868 and 1998 respectively.  The stage is now set for full hearing against Trump before the Senate in early 2020.

The past three years of Donald Trump as president have been full of controversies both in the domestic as well as in the international politics. His legitimacy was challenged when it was stated that the Russian secret services influenced the voters in his favour by maligning his political rival Hillary Clinton.  During his present tenure in the oval office, he may have been wavering on many issues, but he took a firm stance on the issue of enquiring the allegation that the Russians had helped him in getting elected. He has succeeded, though partially. In spite of the Mueller Report on the Investigation into Russian Interference in the 2016 Presidential Election, which has not suggested any action immediately against the president, but it is not ruled out that Trump can be prosecuted for concealing facts or not cooperating with the enquiry after he demits the high office. The report stated that Trump had invoked on May 8, 2019, executive privilege to withhold vital information about the case from being passed to Congress. However, with the exposure of the Ukraine controversy, Trump is now implicated in the impeachment.

During the past three years, Trump has been trying to avoid any open enquiry about the Russian role in his elections. He has been claiming that the allegations as “made up story, ridiculous and hoax”.

Meanwhile, some academic studies reveal that the Russian interference could be true. Kathleen Hall Jamieson, a professor of communications at the University of Pennsylvania, has claimed in her book, Cyberwar: How Russian Hackers and Trolls Helped Elect a President-What We Don’t, Can’t and Do Know. She even dares to ask — and even attempts to answer — whether Russian meddling had a decisive impact in 2016. On the basis of the available evidence and analysis, she concludes that Russia very likely delivered Trump’s victory.

In this scholarly work, she quotes from a news item published in New York Times on June 8, 2016,that a Facebook user had posted a link to DCLeaks.com and wrote that users should check out the “the hidden truth about Hillary Clinton, George Soros and other leaders of US”.

It may be noted that George Soros, a Hungry-born billionaire is one of the richest donors who liberally funded Hillary Clinton’s campaign. The name of the Facebook user was stated to be Melvin Redick from Harrisburg, Pennsylvania, but the records revealed that no such man existed. Later, it was learnt that DECLeaks was the creation of the Russian military intelligence agency GRU.

While the issue of the alleged Russian interference in favour of Trump could be conclusively investigated, the allegation has come that the Ukraine has been asked to support President Donald Trump in the forthcoming 2020 elections by ordering a through enquiry against the former vice-president Joe Biden, who is seeking Republican nomination for the coveted office. The process of the impeachment was set in on December 18, 2019 with the resolution of the House of Representatives on the abuse of power and obstruction to the Congress. Earlier, a House Impeachment Committee enquiry revealed that to ensure his victory in the 2020 presidential elections, Trump sought the help of the Ukraine president, Volodymyr Zelkensky, for ordering probes against Biden and also ordering enquiry into the  alleged role of Ukraine in the 2016 US presidential poll.

It took almost three months for the Congress to complete the preliminary investigations on the basis of a whistleblower’s complaint about the Trump’s plan to use a foreign power to win the election. Three high power Congressional committees, Intelligence, Oversight and Foreign Affairs were engaged and the text of the report was voted in the Intelligence Committee on December three this year, which approved it by 13-9 votes. Next day, the Judiciary Committee started hearing on the report, which also approved by 23-17, thus paving the way for the Impeachment of President Trump. During all these inquiry process, Trump asked his officials to ignore the subpoenas of the Congress.

With the elections only 10 months away, the Republican Party, has an option not to field Donald Trump again in the 2020 polls, which is unlikely. The Georgian unit has decided unanimously to support Trump, though his arch rival Joe Walsh in a bitter criticism described Trump as a criminal who only believes in his own selfish motives. Roque De La Fuente, a businessman, is against Trump for his policy regarding immigrants. The other states, Minnesota, Kansas, Alaska, South Carolina, Arizona and Nevada too, have decided to support Trump. They even claimed that it would be unnecessary to add to the costs, when the overwhelming majority within the party is for Trump.

Among Republican nominees, William Floyd Weld, a respected public figure and former governor of Massachusetts, may become a rival to Trump for the candidacy. However his bitter observation about the Republican Party’s state units rallying around Trump without conducting the elections within the party ranks is quite bitter. He says, “Apparently, Trump’s romance with Putin extends to emulating the Russian approach to polls.” 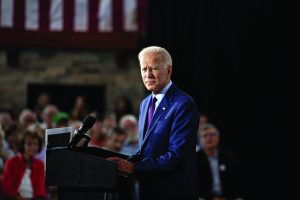 It was quite natural for Trump and his supporters to implicate the former US vice-president, Joe Biden , in the Ukraine controversy. However, it is for Trump to explain his “dirty tricks”. Instead of indulging in a conspiracy, Trump could have defeated him the election, because there are many aspirations within the party for the coveted post. Even a large of them opted out, but many are still seeking nomination from the party. Apart from Biden they include Michael Bennet, Michael Bloomberg, Cory Booker, Pete Buttigieg, Julián Castro, John Delaney, Tulsi Gabbard, Amy Klobuchar, Deval Patrick, Bernie Sanders, Tom Steyer, Elizabeth Warren, Marianne Williamson and Andrew Yang.

Indians may be interested in the nomination of Tulsi Gabbard, a staunch follower of the Sanatan Dharma (Hinduism), for the high office. She was sworn in by taking oath with a copy of Bhagwad Gita  as a member of the House  of Representatives from Hawai in 2012. She had won the election with a big margin. The ceremonial swearing-in conducted by Speaker of the House John Boehner. The initial response from the Indian community is quite encouraging, but the community appears to be just awaiting the political trend before formally announcing their support to a nominee.