In another big attempt to control terrorism in the world, the United States has designated Pakistan based terror organizations, including Lashkar-e-Taiba (LeT), the Milli Muslim League (MML) and seven of its top officials, as Specially Designated Global Terrorists on April 2.

US Department press release states, “The Department of State has amended the designation of Pakistan-based terrorist organization LeT, to include the aliases MML and Tehreek-e- Azadi-e Kashmir (TAJK). The aliases have been added to LeT’s designations as a Foreign Terrorist Organization (FTO) under Section 219 of the Immigration and Nationality Act, and as a Specially Designated Global Terrorist (SDGT) under Executive Order 13224.”

US decision is a major setback to Hafiz Saeed, the founder of MML. He was even planning to contest 2018 elections. US government official has said “(US) treasury is targeting the MML and a group of seven global terrorists who are complicit in LeT’s attempts to undermine Pakistan’s political process.” 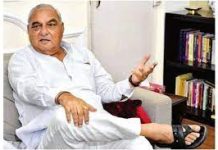