Amid growing concerns over the rise in incidents of mob lynching in the last few days the Uttar Pradesh police decided to hire 250 digital volunteers at each of the 1,469 police stations to curb mob lynching incidents and circulation of rumors or fake news on social media.

According to OP Singh, Uttar Pradesh Director General of Police (DGP), UP Police, with 4,41,000 Twitter followers, is the most active on social media platform.

“Now we are launching our digital volunteers’ campaign. Every police station will have 250 digital volunteers, they will play a key role in busting rumors and will report any illegal activities in the locality,” added OP Singh.

UP Police took to Twitter and shared the campaign, “Your opportunity to be a digital volunteer of #UPPolice is here. If you are a peace-loving, law-abiding, socially and digitally active citizen of UP then join hands with us in our first of its kind community policing initiative in the country.”

These digital volunteers will comprise school teachers, retired servicemen, principals, doctors, journalists, priests, maulvis and other public representatives residing within the jurisdiction of each of the police stations.

The process will select two individuals from every village or locality who will be interacting through WhatsApp group and the group will be monitored by a policeman at every police station for updates 24×7.

The volunteers will be short-listed by a committee headed by the district police chief.

Drug, arms and ammunition brought from Pakistan through drone seized

Cancel case against Sikh youth registered due to photo of Sant... 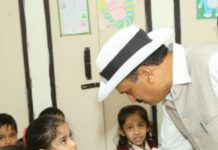