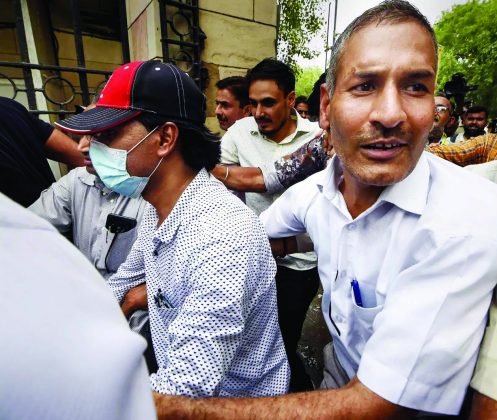 The court has disbanded the SIT constituted by the UP DGP for probing the case. even as it  transferred  the investigation in all the six cases to the Special Cell of the Delhi Police. The apex court has also turned down the UP govt’s plea to stop Zubair from tweeting,, reports Mudit Mathur

The Supreme Court while upholding right to free speech and expression of a journalist, transferred all the six cases registered against Mohd. Zubair, cofounder of fact checking website Alt News in Uttar Pradesh to the Chief Judicial Magistrate, Patiala House Courts Delhi, and granted interim bail, subject to his filing a personal release bond in the amount of Rs 20,000 in connection with all the cases registered in UP. Zubair came out of Tihar jail the same evening.

“The direction and the protection of the interim bail will also apply to future FIRs which may be registered on the basis of Zubair’s tweets,” the court added. The Uttar Pradesh government was hugely embarrassed when it tried to justify its stand on sustained persecution of Mohd Zubair before the Supreme Court hearing.

The court also disbanded the SIT headed by Inspector General Dr Preetinder Singh which was specially constituted by the Director General of UP Police. The investigation in all the six cases and further case on this account stood transferred to the Special Cell of the Delhi Police. Significantly, the apex court has also turned down plea to stop Zubair from tweeting raised by Garima Prasad Additional Advocate General of Uttar Pradesh.

On Uttar Pradesh government’s plea to bar Mr Zubair from tweeting, the bench headed by Justice DY Chandrachud said, “It’s like telling a lawyer not to argue any further. How can you tell a journalist he cannot write? If he does something that violates the law then he is answerable to law. But how can we take anticipatory action against a citizen when he is raising his voice?” “Every citizen is answerable for what he does in public or private. We will not pass any such order. He will be answerable as per the law. Evidence is all in public domain,” the bench said.

Justice Chandrachud said there was absolutely no justification in keeping Zubair in custody when the Delhi court has granted him bail in an FIR registered by a special cell of Delhi police. The special cell is investigating a whole gamut of tweets and securing funding by Zubair. “Existence of power of arrest must be distinguished from exercise of power of arrest, which should be pursued sparingly,” the court remarked.

Zubair was first arrested by the Delhi Police on June 27 for allegedly hurting religious sentiments for a tweet in which the journalist shared a still from a 1983 Bollywood film. Later, police in Uttar Pradesh sought his custody. Six dormant cases were suddenly revived on him during the period of his incarceration– two in Hathras and one each in Sitapur, Lakhimpur Kheri, Muzaffarnagar, Ghaziabad, and at Chandauli police station – on almost similar charges with regard to his tweets.

Justice Chandrachud had remarked earlier when matter was mentioned, “the practice of repeated charging and arresting was a “vicious cycle” and asked the Uttar Pradesh Police on July 18 to not take precipitative action against Zubair in these cases till next hearing on July 20.

The bench considered the case – one of seven against Zubair on which police decided to act within a period of three weeks – registered by Lakhimpur police on September 18, 2021, based on a complaint by a correspondent of Sudarshan TV, a channel which is known for airing intemperate Hindutva content.

In 2020, the Supreme Court took strong objection to the “Bindas Bol” programme by Sudarshan TV that claimed to expose a “conspiracy to infiltrate Muslims in government service.” The court then said a message must be sent across the media that “a particular community cannot be targeted” in the name of investigative journalism and that the “country cannot survive with such an agenda”.

The FIR charged Zubair under Section 153-A (promoting enmity between two groups) for accusing this channel on Twitter of using a doctored image of the famous Medina Mosque in a graphic depicting an Israeli rocket attack on the Gaza strip in 2021.

Appearing for Mohd Zubair, senior advocate Vrinda Grover, a champion of human rights and women’s rights, sought to point out that there is little by way of incitement in Zubair’s tweets – and that incitement was actually being done by the channel, Sudarshan TV, whose coverage Zubair was bringing to light.

“Please see the tweets, there is no incitement whatsoever. He is pointing out as a fact checker that the picture of mosque used in a graphic of Sudarshan TV is wrong mosque. And I tag the police saying hope they will take action,” she explained.“Who is actually inciting? The graphic shared by Sudarshan TV channel. I, as a fact checker, place the actual image of Gaza bombing and image of real mosque. For this, FIR lodged for 153A, 295A. This is about silencing,” she added.

Noting that police got 14-day custody for allegation of offences under sections that do not attract more than three years in jail, she also sought to point out the seizure of devices that were unconnected with Zubair’s tweets. “What kind of police remand application is this? They will take me into custody and take me to wherever they want to investigate tweets from 2014 to take into custody of all devices. Is this not a statutory abuse of the power of investigation?” she asked. Grover highlighted the order of the Supreme Court granting bail to journalist Prashant Kanojia, who had been arrested in 2019 over tweets critical of Uttar Pradesh chief minister Adityanath.

Grover pointed to a distinct threat faced by Zubair by virtue of his job, she contended, “In this digital age, the job of someone who is debunking false information may draw the ire of others. But the law cannot be weaponised against him. The dormant FIRs are activated the moment I secure bail in any case. Dormant FIR gets suddenly activated. That is why I say there is more than meets the eye. There is a scenario of encircling me.”

The Supreme Court while protecting free and fair journalism, bailing out Mohd Zubair from the prison is expected to deliver a detailed judgement dealing with the various aspects of freedom of the press and abuse of criminal law muzzling dissent by facing strategically planned multiple proceedings to harass and silence free expressions.