It goes to the credit of the Indian Government and Modi’s cabinet colleagues and the team of the foreign office. The Indian diplomats were working 24×7 to ensure the safe passage of the Indian citizens from the war-ravaged country.

The mighty river, Ganga, flows from the high Himalayas to the Ganga Sagar in the Bay of Bengal, nestling India’s vast planes, valleys; this natural phenomenon resembled, if not repeated, when the world witnessed India’s civil and military aircrafts rescuing thousands of people from the war-ravaged Ukraine. They were Indian citizens, young men and women, students studying medicines or engineering, Bangladeshis, Nepalese and even persons from Tunisia either studying or working in the country in different fields.

The evacuation of thousands of the stranded Indians and also people from other nationalities is being named as the Operation Ganga. It reminds us of the legendary king, Bhagiratha, who had brought, the perennial, Ganga, the life-line of northern India from Lord Shiva’s hair. The efforts to channelize her flow could be accomplished by great efforts. Similarly, the evacuation was equally challenging that too amidst shelling of guns and missiles hitting even hospitals. The children’s hospital at Mariupol was hit on March nine injuring as many as many as 17 people.

It goes to the credit of the Narendra Modi-led Indian Government and Modi’s cabinet colleagues and the team of the foreign office. The Indian diplomats were working 24×7 to ensure the safe passage of the Indian citizens from the war-ravaged country. If Prime Minister Modi was in live contact with the Russian President, Vladimir Putin and the Ukrainian President, Volodymyr Oleksandrovych Zelenskyy, his four ministers, Hardeep Singh Puri, Jyotiraditya Scindia, Kiren Rijiju and V K Singh were present in Hungary,  Romania, Slovakia and Poland respectively for facilitating the evacuation of stranded Indians. Their presence in the region has helped in organizing a multi-pronged approach in the rescue operations, which included the commissioning of the Indian Diasporas.

Amidst this crisis, like the Red Cross, the Indian Tri-colour symbolized peace, brotherhood and the hope and the courage to face the challenge. It was not only for two bright medical students of Karantaka, Rachna Shree and Sneha , who used crayon to paint Tri-colour on their car before driving 1300 kilometres to safety from the war-torn country, Ukraine. The Indian emblem was also used by the young men and women, whether they were citizens of India or belonged to, Pakistan or Bangladesh. With the Tri-colour in their hands, they could travel to safety amidst the gun battles. It, perhaps, was quite embarrassing for the Pakistanis, who were watching the three-hour summit meeting between the Russian President Vladimir Putin in Moscow, when the Russian invasion took place, but little effort was made for their protection.   The Pakistani students, abandoned by their country, which was just a part of India till 1947, walked miles and miles under the Indian Tri-colour to Poland and Romania bordering Ukraine. There were also reports that the Pakistani diplomatic missions could not provide any relief to them due to the paucity of funds. Even the diplomats have not received their salaries for the past several months.

With the near evacuation of the most of the Indians from the war-ravaged country, under the banner of ‘Operation Ganga’, the mission has achieved its objective.  Except a few unfortunate casualties, the lifting of thousands of her citizens could take place due to the team work comprising each section of Indian society. India had deployed her military aircrafts as well as civilian aviation companies such as Air India, IndiGo for carrying the Indians from the war-ravaged country. They are operating special flights from Romania, Hungary and Poland as the Ukrainian airspace has been shut down since February 24. With nearly 100 flight trips made between Poland, Romania, Ukraine and India to retrieve all Indians, the Indian embassy officials have been working “tirelessly” to reach every corner of Ukraine. India has deployed the Russian-origin Ilyushin-76 heavy-lift transport aircraft, a few of them with more than 800 students have already reached the Hindon airbase near Delhi. The special flights are being arranged from Romania, Hungary and Poland.

The rescue operation has become much more focused following the killing of Naveen Shekarappa Gyanagoudar, a fourth-year medical student at the Kharkiv National Medical University, in Kharkiv. The evacuation strategy is the deployment of resources accompanied by keeping the diplomatic channels with Russia as well as with the Ukrainian authorities. The Indian Aviation Minister Jyotiraditya Scindia, who was in Bucharest, during the operation, met Romanian Prime Minister Nicolae Ciuca on March 9 to thank his government for facilitating entry and ensuring the safety of Indian citizens amid the “grim situation” at the Ukrainian borders. 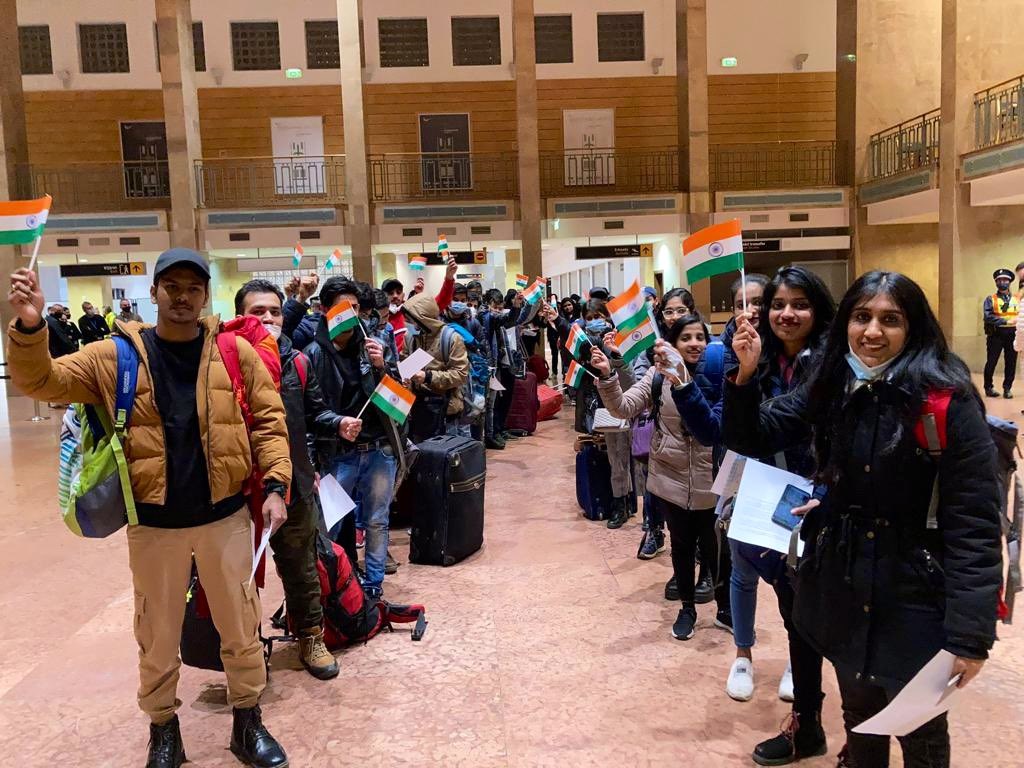 Apart from setting up 24×7 call centre and collecting the state-wise data about Indian students, the digital platform was also used to get information about their location and also giving them instructions for ensuring their safe passage to the neighbouring countries. The help of the Indian companies operating in the region is also being sought for extending help to the stranded students. Their teams are also visiting the border camps for helping in plugging gaps, if any, in arrangements.

“The students who cannot find vehicles or buses and are in railway station can proceed on foot to Pisochyn (11 km), Babai (12 km) and Bezlyudivka (16 km),” the advisory told them.

The Indian embassy extended humanitarian help to the students of Pakistan, Nepal and Bangladesh. The flights carrying about 1200 young students from the Romanian capital, Bucharest, also included a few non-Indian scholars too. Among the leaders, Bangladesh Prime Minister Shekh Haseena promptly thanked India and Prime Minister Narendra Modi for evacuating citizens of her country’s citizens, where the situation was getting worse, especially after February 26, when the Russian forces marched into Ukraine,

The students from India and Pakistan had prepared Indian flags with the Ashok Chakra by obtaining spray paints. They hired buses from Odessa, the port strategic city on the Black Sea, to reach Molodova, where local citizens and the Indian embassy officials had made arrangements for them to reach Romania. Even Turkish students used the Tri-colour to pass the border checkpoints without hassle. The Indians experienced an unprecedented love and regard from the Molodovan citizens, who provided them with free accommodation, taxis and buses to get to Romania.  The social media was abuzz during the first week of March about the Pakistanis using Tri-colour for escaping from Ukraine, however, the post on the Facebook about their escape was later withdrawn.  A young student from Pakistan, Asma Shafique, who was rescued by the Indian embassy officials in Kyiv has posted a video thanking India, stating,”I want to thank the Indian embassy of Kyiv for supporting us all the way here as we were stuck in a very difficult situation and I also want to thank the Prime Minister of India for supporting us. Hope we get home safely because of the Indian embassy,”

Amidst the roaring of guns

The saga of the ‘Operation Ganga’ would remain in-conclusive if the courage and initiative of the Indian embassy officials is not appreciated, who had driven to Poltava to meet about 600 Indian students stranded at Sumy, in the north-eastern Ukraine. V Muraleedharan, Union Minister of State for External Affairs, told an Indian television channel that “Amidst heavy shelling, the Indian embassy officials had finally reached Poltava. They reassured our students , who did not betray any fear or panic.”

Muraleedharan has been assuring the students to remain prepared to leave at short notice. “All of them have been very brave until now, we want them to be just a bit more patient. Every single person will be brought back safely,” he had said. And, thus India has maintained her assurance to her citizens.

As part of the Operation Ganga evacuation drive, India has successfully brought close to 17,000 students back to India until March 8. Another 2,000 had crossed the Ukrainian borders to safety.

An operation with quiet diplomacy

During this fortnight-long rescue operation, India has against displayed confidence and sagacity as its swung into action to protect its citizens even as it raised efforts to bring about peace. While Modi held negotaitons at the highest level, the Indian diplomacy was at the best, because the whole nation stood behind him. India has to gear-up her resources for saving the precious life of her citizens even while promoting the cause of peace. It is estimated that more than 20,000 Indians are stranded in the war-zone. The Ukraine government statistics reveal that more than 18,000 Indian students have been studying in the prominent educational centres such as Taras Shevchenko National University of Kyiv, Bogomolets National Medical University and Kyiv Medical University of UAFM.