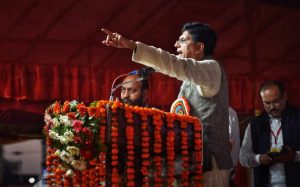 The railway minister was in Lucknow to attend the 70th annual general meeting (AGM) of the Northern Railway Men’s Union.

In his address, Goyal said, the government was sensitively considering many demands of the railway employees, like regularisation of the service of the apprentices. He further added that the Union of the Railway Employees was misguiding the youth working as apprentices and was leading them on the wrong path.

Goyal’s statement apparently did not go well with the railway employees and it led to chaos as railmen started raising slogans and even threw a plant-pot at railway minister.

The police tried to pacify the employees, but they were outnumbered.

The security personnel escorted Goyal to his vehicle.

However, Piyush Goyal’s office denied that any such attack happened.

“Certain incorrect news reports have appeared regarding Railway Minister’s speech at today’s event of Northern Railway Men’s Union in Lucknow. It is to clarify that there was no attack on Shri Piyush Goyal or his car and nobody was injured,” the Piyush Goyal Office tweeted.