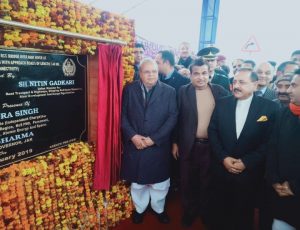 Union minister Nitin Gadkari on Tuesday inaugurated 1210-meter span-bridge over the river Ravi in Jammu and Kashmir, which will reduce the distance between Kathua in Jammu and Pathankot in Punjab to 8.6 km from 45 km, the government said in a statement.

The bridge over Ravi river at Keerian – Gandial will benefit over 2.2 lakh people living on the two sides. It has been constructed at a cost of Rs 158.84 crore to improve inter-state connectivity. 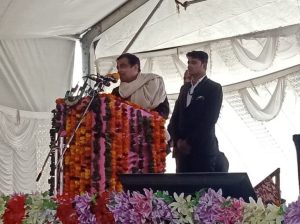 While dedicating the bridge to the Nation, Gadkari said that Prime Minister Narendra Modi-led government had set a new mark in timely delivery of public goods by completing various projects on or before time.

Gadkari said that the government was focussed on providing corruption-free and transparent governance to the people without compromising quality.

Giving details about the ongoing highways projects in Jammu and Kashmir, Gadkari said that the NH network in the state has seen an increase of 969 kms in the last four years. The total length of NHs in the State was 1695 kms in 2014, which has gone up to 2664 kms in 2018. Number of NHs has also gone up from seven to 14 in the same period. New NHs of 969 kms were announced during the period. In addition, four State roads of 400 kms have also been approved.

He said, his Ministry of Road Transport and Highways is executing 16 projects worth Rs 45,107 crore through NHAI, NHIDCL, State PWD and BRO under the Prime Minister’s special development package (PMDP) for Jammu and Kashmir. Of these, works worth Rs 30,000 crore have already started. NHAI is executing eight projects worth Rs 14,987 crore, NHIDCL/BRO – six projects costing Rs 24120 crore and PWD – two projects for Rs 6,000 crore.