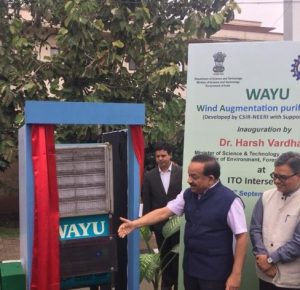 Speaking at the inauguration Dr. Harsh Vardhan said that the prototype device that has been indigenously developed has the capacity to purify air in an area of 500 meter square. Dr. Vardhan further added that the device consumes only half a unit of electricity for 10 hours of running and has a maintenance cost of only Rs. 1500 per month. “We are in the process of developing a bigger version of WAYU which can purify air in an area of 10,000 meter square and also the designs of future WAYU devices will have even better aesthetics and can be deployed in bus shelters etc,” said Dr. Vardhan.

The device works on two principles mainly Wind generation for dilution of air pollutants and Active Pollutants removal. The device has filters for Particulate Matter removal and activated carbon (charcoal) and UV lamps for poisonous gases removal such as VOCs and Carbon Monoxide. The device has one fan and filter for sucking and removing Particulate Matter. There are two UV lamps and half kg of activated carbon charcoal coated with special chemical Titanium Dioxide.

By 15th of October, the ministry plans to install 54 more WAYU devices at various traffic intersections across Delhi. 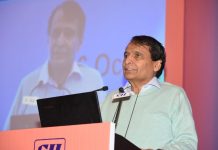