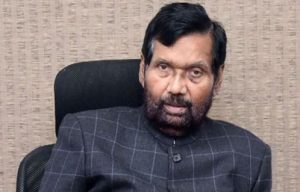 Paswan has been hospitalised for the last few weeks and underwent heart surgery in Delhi.

LJP Chief Chirag Paswan informed about the demise of his father. “Papa… Now you are not in this world but I know you are always with me wherever you are. Miss you Papa …” Chirag tweeted. 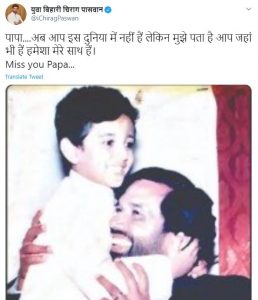 Condoling the death of Paswan, President Kovind said, “In the demise of Union Minister Ram Vilas Paswan, the nation has lost a visionary leader. He was among the most active and longest-serving members of parliament. He was the voice of the oppressed, and championed the cause of the marginalized.”

“A firebrand socialist in youth, mentored by the likes of Jayaprakash Narayan during anti-Emergency movement, Paswan ji had enviable rapport with masses and he ardently strove for their welfare. Condolences to his family and supporters,” President Kovind added.

Prime Minister Narendra Modi expressed condolences on the demise of Ram Vilas Paswan. “I am saddened beyond words. There is a void in our nation that will perhaps never be filled. Shri Ram Vilas Paswan Ji’s demise is a personal loss. I have lost a friend, valued colleague and someone who was extremely passionate to ensure every poor person leads a life of dignity.”

PM Modi further said, “Shri Ram Vilas Paswan Ji rose in politics through hardwork and determination. As a young leader, he resisted tyranny and the assault on our democracy during the Emergency. He was an outstanding Parliamentarian and Minister, making lasting contributions in several policy areas.”
“Working together, shoulder to shoulder with Paswan Ji has been an incredible experience. His interventions during Cabinet Meetings were insightful. From political wisdom, statesmanship to governance issues, he was brilliant. Condolences to his family and supporters. Om Shanti,” PM Modi added.