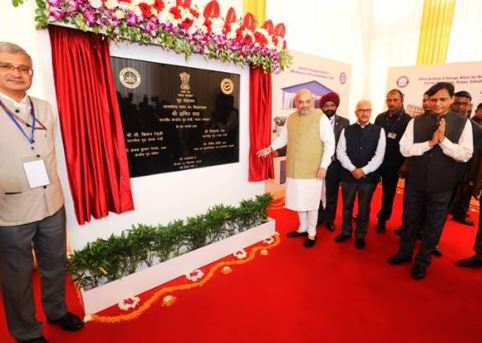 Addressing the gathering, Shah said that a scientific Census process is seminal in the development of not only the social flow in the Nation, but also for laying out the future plan of development for the last man in the society. The Home Minister expressed confidence that the Janganana Bhawan building would get completed well in time and that the mammoth exercise of the Census 2021 would get completed here and the Census figures would be announced to the Nation from this building only. Shah informed that the upcoming Janganana Bhawan would be a Green Building. He added that the concept of Green Buildings needs to be popularised in the country and the Government is taking forward this concept with buildings like the Janganana Bhawan.

Stressing on the importance of people’s participation in the Census process, the Home Minister observed that 130 crore Indians need to be made aware about the importance of Census, as it is the foundation for long-term future planning for growth and development in the country. The valuable data generated from the Census exercise is useful for multifarious developmental activities. Each citizen would be able to participate in country’s development process only when they are aware of the multidimensionality of the Census process and the data it generates, he added.

Tracing the history of the Census process in India, Shah said that Census is a centuries old tradition in India. Earlier, it used to be a decentralised exercise, happening individually in villages and janpads. He talked about the inception of modern census exercise in British India and how it progressed in successive decades to evolve into an efficiently planned process in recent decades by using latest technology.

Talking about the use of latest technological developments during the Census 2021 process, Shah said that the process of a ‘Pen-Paper Census’ would be transformed to a ‘Digital Census’ in the upcoming Census exercise by using the latest technology. He informed that this step is a revolutionary initiative that is being taken during the Census 2021 exercise. In this process, people would be able to upload the details of self and family on the newly developed mobile app themselves. Shah emphasized that besides maintaining the data in paper forms, availability of data in digital form would help in its detailed multi-dimensional analysis and utilisation for public welfare, using latest software. Home Minister congratulated the office of Registrar General of India (RGI) for this path breaking initiative.

Shah informed that the 2021 census would be, inter alia, an exercise in the study of human resources, public life, culture and economic infrastructure in the country. It would function as the building block for scientific planning of the future economic development in the country. He added that constituencies would get delimited based on this census data, which would lead to strengthening of the democratic process in India at all levels. It is of great importance that this Census becomes a ‘Jan Bhagidari’ exercise like never before.

Shah encouraged the officials of RGI and said that everyone present here has an important role in laying the foundation stone of future growth and development of the country. Each one of us has to work whole-heartedly in the direction to make this Census exercise a success. In the times to come, this effort would be your precious contribution in strengthening the economic growth and democratic process in the country, he added.