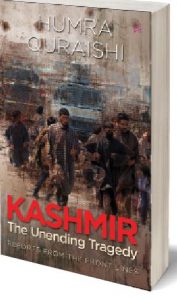 Humra Quraishi had been reporting from the Kashmir Valley right from 1990 when the rebellion had broken out rather too openly, in that full-fledged way. And all these years she has been focusing on the changing political patterns in the region, which in turn have carried off shoots and left imprints on all spheres of life. The going has been tough for the Kashmiris. What, with blatant human rights violations, violence and counter spreading out, killings and detention of even young boys. And to further compound the tragedies there are those fake assurances fitted in the speeches of the political rulers of the day. This book exposes the politicians. Highlights the political games getting played. Ruining lives and livelihoods of hundreds and thousands.

Stark portrayals stand out in the book. There are also personalized accounts of the author’s travels in that region. And what comes to the fore is that vital connect. In fact, rather too effortlessly the reader gets transported to the ground realities prevailing in the Valley. The reader could be also left sitting in that introspective mood, wondering what is the government doing to the Kashmiris and to the Kashmir Valley? What is the government’s policy? For how long can these conditions prevail in the Valley? Where are those talks and discussions for a political settlement? Will this crisis get further compounded and complicated in the coming year?

This book also has an entire section carrying the author’s interviews with the who’s who, who have been commenting,directly or indirectly, on the Kashmir situation. These interviews could be of much significance for researchers and academics. Also, for planners. That is a different matter altogether that there exists no visible planning on how to contain the crisis in the Kashmir region.

There are 25 of these interviews, where those interviewed have commented on the various dimensions to the Kashmir crisis — political, humanitarian, socio — economic, medical and health related, unmarked graves and the dead lying tucked in those graves, the way -out from this crisis.

In fact, way back in 2001, when the author had interviewed Noam Chomsky and had asked him to comment on the Kashmir situation, this what he had to say — “Yes. There could be a solution to the Kashmir crisis. Two principles are to be involved- the voice of the Kashmir population has to be heard and also the UN’s call for a referendum. The Kashmir problem took this unfortunate turn after the elections were rigged and till the Kashmiri people’s voice / opinion is heard there can be no ready solution.” 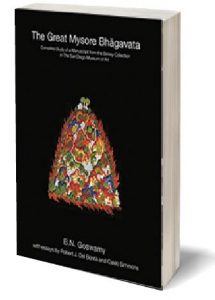 Even before I started reading this thick volume, a combination stood out. Call it an extremely readable combination! Niyogi Books does the finest in book publishing. And Professor B. N Goswamy is an internationally acclaimed art historian. The end result is this beautifully brought out volume, which, as the very title relays, focuses on the Mysore Bhagavata.
It’s a visual treat, as the text is accompanied by paintings and illustrations. And the artists have put in their very best. To quote — “At each step the paintersseem to have been aware of the importance of the text itself. For the Purana they were engaging with has a very special place in the heart of the devotees, there being the belief that the Bhagavata ‘is equal in status to the Veda.’”

In fact, it is significant to note that perhaps with the exception of work done in the Sultanates of the Deccan , we have focused somewhat lesser attention on the paintings and art forms of the southern belt. Many of the illustrators and painters have to this day remained unknown and unnamed…perhaps, they carried on with their arts because of sheer passion and that emotional connect with the divine.

Though the scope of the volume is restricted to the second half of the Tenth Book of the Purana, but for the devotees there’s a wide ranging range…

I should say that this book stands out. A complete treat for lovers of our heritage, religious splendor , arts, and of course for researchers and scholars.