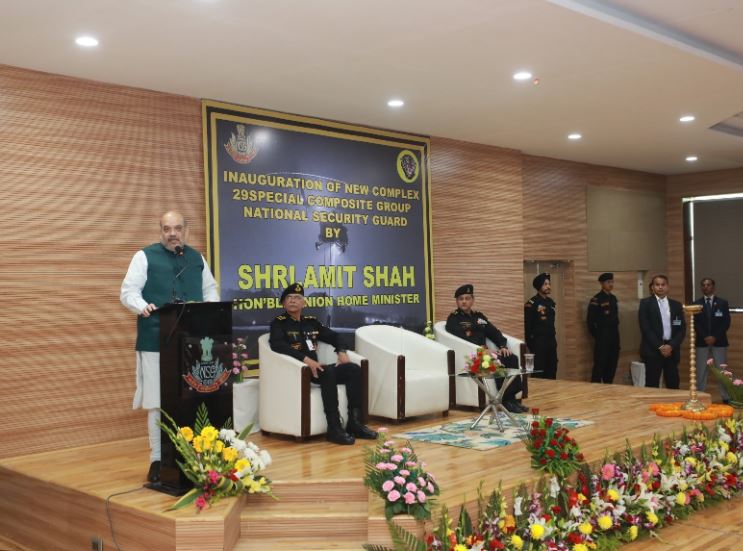 Presiding over the inauguration of the National Security Guard (NSG) Regional Hub campus at Kolkata today, Union Home Minister Amit Shah termed this as an important step in the direction of giving adequate facilities to the brave NSG jawans, which are important for them to function unhindered in ensuring the security of the Nation.

Addressing the gathering, Shah assured the force that under the leadership of Prime Minister Narendra Modi, all expectations of NSG from the Central Government would be fulfilled in the next 5 years. The government would put in place an efficient system that would fulfil all the needs of the force, whether it is related to the training modules for the officers for keeping them abreast with latest technology available globally and modus operandi of terrorist organizations; provision of modern technology, arms and equipments; family welfare, among others. Government of India wants to keep NSG two steps ahead in the current global scenario and this vision would be achieved in the near future, he said.

Shah said that since its inception, NSG jawans have given supreme sacrifices to secure the Nation from all terrorist threats and have been successful in instilling confidence in the people. The NSG commando has become synonymous with a ‘sense of security’ for the citizens of India, by dedicating each second of his valuable life for securing the Nation. Shah appreciated the preparedness levels of the NSG to keep up PM’s vision of zero tolerance towards terrorism and eliminating them with minimum collateral damage. He also encouraged the force to keep evolving with the changing threat scenario, update its skills and capabilities continuously, so as to bring down the response time towards any challenge. Stressing on the importance of bringing down the duration of eliminating a threat, he said that there is a need to bring a positive change in the training policy, infrastructure, response strategy, technology and the priority of the jawans in the training. Shah said that the mere presence of NSG must be a deterrent enough for those who think of spreading terror and harm the unity and integrity of the Nation.

The Home Minister presided over the inauguration and founding stone laying ceremony of various welfare projects for NSG, amounting to over Rs. 245 crores, across Kolkata, Manesar, Chennai and Mumbai. He said that the various facilities and schemes being inaugurated today, would go a long way in ensuring the boosting of capabilities of the force and raising the morale of the jawans.

This state-of-the-art regional hub complex at Kolkata, worth over Rs.162 crores, will have Residential and Non Residential Complexes to house 460 persons and families, office accommodation and modern training facilities. This latest NSG complex has become a model regional hub of the NSG, which will help in honing the professional acumen of the NSG commandos and also contribute significantly in capacity building of the first responders, the Police forces of the States.   The area of responsibility of this Hub comprises of West Bengal, Bihar, Jharkhand & the entire North East. The Kolkata hub, hitherto functioning from the Kolkata airport, is the fourth to have permanent infrastructure after Mumbai, Chennai and Hyderabad.