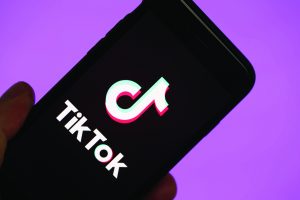 United Nations entity UN Women India and TikTok, world’s leading destination for short form video content have come out with a unique initiative which kick-started from November 28, 2019 to ensure gender equality and empowerment of women in India.

The UN entity has collaborated with TikTok for #KaunsiBadiBaatHai campaign that aims to raise awareness and inspire action towards making the world free from violence against women. This initiative is a part of the global 16 Days of Activism focused on ending gender based violence. The ‘Orange The World’ campaign that kicked off on November 25th observed as International Day for the Elimination of Violence against Women and will continue till the International Day of Human Rights on December 10.

TikTok will run the hashtag #KaunsiBadiBaatHai on the platform for 16 days with an objective to mobilize users from across the country. The in-app campaign aims to encourage users to show their support by undertaking the #KaunsiBadiBaatHai “Rap for Change” challenge and sporting shades of orange, in their videos. The colour orange is globally recognised as the colour for the elimination of violence against women and symbolises a world that is free of all acts of violence against women.

The campaign rap called Kaunsi Badi Baat Hai that users can use as soundtrack for their videos is,  written and rapped by Delhi based 16 year old Abbas Ali from Slam Out Loud and composed by Aditya Shekhawat, highlight instances of violence against women and questions existing negative socio-cultural norms.

Speaking about the collaboration, Nishtha Satyam, Deputy Country Representative, UN Women India said, “UN Women is committed to making spaces safe for women and young girls, for violence against women and young girls has real consequences and costs. Through our proud partnership with TikTok for this campaign, we hope to raise awareness and unite users to break the silence around violence.”

Nitin Saluja, Director, Public Policy, TikTok India said, “ At TikTok our mission is to inspire and enrich people’s lives and give them an outlet to express themselves in a way that adds value to the community. We are proud to collaborate with UN Women India for this campaign as their community partners and believe that the highly engaged community on TikTok has the potential to contribute towards a change in society and spread the message of a violence free-world.” 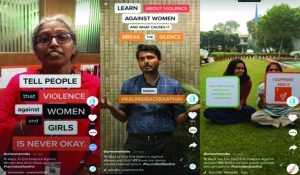 UN women is the United Nations entity dedicated to gender equality and the empowerment of women. A global champion for women and girls, UN Women was established to accelerate progress on meeting their needs worldwide. UN Women supports UN Member States as they set global standards for achieving gender equality, and works with governments and civil society to design laws, policies, programmes and services needed to
ensure that the standards are effectively implemented and truly benefit women and girls worldwide.

UN Women also coordinates and promotes the UN system’s work in advancing gender equality, and in all deliberations and agreements linked to the 2030 Agenda. The entity works to position gender equality as fundamental to the Sustainable Development Goals, and a more inclusive world. TikTok is the leading destination for short-form mobile video. Our mission is to inspire creativity and bring joy. TikTok has global offices including Los Angeles, New York, London, Paris, Berlin, Dubai, Mumbai, Singapore, Jakarta, Seoul, and Tokyo.

The numbers are staggering because about 35 per cent of women worldwide have experienced either physical or sexual intimate partner violence or non-partner sexual violence. Globally, someone other than a partner has sexually assaulted about 7 per cent of women. Globally, as many as 38 per cent of murders of women, were committed by an intimate partner. About 200 million women have experienced female genital mutilation or cutting.

This issue is not only devastating for survivors of violence and their families, but also entails significant social and economic costs. In some countries, violence against women is estimated to cost countries up to 3.7% of their GDP — more than double what most governments spend on education. Failure to address this issue also entails a significant cost for the future. Numerous studies have shown that children growing up with violence are more likely to become survivors themselves or perpetrators of violence in the future.

One characteristic of gender-based violence is that it knows no social or economic boundaries and affects women and girls of all socio-economic backgrounds: this issue needs to be addressed in both developing and developed countries. Decreasing violence against women and girls requires a community-based, multi-pronged approach, and sustained engagement with multiple stakeholders. The most effective initiatives address underlying risk factors for violence, including social norms regarding gender roles and the acceptability of violence.

Since 2003, the World Bank has engaged with countries and partners to support projects and knowledge products aimed at preventing and addressing GBV. The Bank supports over $300 million in development projects aimed at addressing GBV in World Bank Group (WBG)-financed operations, both through standalone projects and through the integration of GBV components in sector-specific projects in areas such as transport, education, social protection, and forced displacement. Recognizing the significance of the challenge, addressing GBV in operations has been highlighted as a World Bank priority, with key commitments articulated under both IDA 17 and 18, as well as within the World Bank Group Gender Strategy.

The World Bank conducts analytical work — including rigorous impact evaluation — with partners on gender-based violence to generate lessons on effective prevention and response interventions at the community and national levels. The World Bank also regularly convenes a wide range of development stakeholders to share knowledge and build evidence on what works to address violence against women and girls. Over the last few years, the World Bank has ramped up its efforts to address more effectively GBV risks in its operations, including learning from other institutions.

Addressing GBV is a significant, long-term development challenge. Recognizing the scale of the challenge, the World Bank’s operational and analytical work has expanded substantially in recent years. The Bank’s engagement is building on global partnerships, learning, and best practices to test and advance effective approaches both to prevent GBV — including interventions to address the social norms and behaviors that underpin violence — and to scale up and improve response when violence occurs.

World Bank-supported initiatives are important steps on a rapidly evolving journey to bring successful interventions to scale, build government and local capacity, and to contribute to the knowledge base of what works and what doesn’t through continuous monitoring and evaluation. Addressing the complex development challenge of gender-based violence requires significant learning and knowledge sharing through partnerships and long-term programs. The World Bank is committed to working with countries and partners to prevent and address GBV in its projects.

The Violence against women and girls: Lessons from South Asia is the first report of its kind to gather all available data and information on GBV in the region. In partnership with research institutions and other development organizations, the World Bank has also compiled a comprehensive review of the global evidence for effective interventions to prevent or reduce violence against women and girls. The World Bank’s Global Platform on addressing GBV in fragile and conflict-affected settings facilitated South-South knowledge sharing through workshops and yearly learning tours, building evidence on what works to prevent GBV, and providing quality services to women, men, and child survivors.

In April 2019, the World Bank awarded $1.1 million to 11 research teams from nine countries as a result of the fourth annual competition. In August 2018, the World Bank committed $100 million to help prevent GBV in the DRC. The gender based violence prevension and response project will reach 795,000 direct beneficiaries over the course of four years. The project will provide help to survivors of GBV, and aim to shift social norms by promoting gender equality and behavioral change through strong partnerships with civil society organizations. The World Bank is also piloting innovative uses of social media to change behaviors.

In October 2016, the World Bank launched the Global Gender-Based Violence Task Force to strengthen the institution’s efforts to prevent and respond to risks of GBV, and particularly sexual exploitation and abuse (SEA) that may arise in World Bank-supported projects. It builds on existing work by the World Bank and other actors to tackle violence against women and girls through strengthened approaches to identifying and assessing key risks, and developing key mitigations measures to prevent and respond to sexual exploitation and abuse and other forms of GBV.

In line with its commitments, the World Bank developed an action plan for implementation of the Task Force’s recommendations, consolidating key actions across institutional priorities linked to enhancing social risk management, strengthening operational systems to enhance accountability, and building staff and client capacity to address risks of GBV through training and guidance materials.

The World Bank has developed  a good practice note (GPN) with recommendations to assist staff in identifying risks of GBV, particularly sexual exploitation and abuse and sexual harassment that can emerge in investment projects with major civil works contracts. Building on World Bank experience and good international industry practices, the note also advises staff on how to best manage such risks. A similar toolkit and resource note for Borrowers is under development, and the Bank is in the process of adapting the GPN for key sectors in human development.

In addition to the Good Practice Note and GBV Risk Assessment Screening Tool, which enable improved GBV risk identification and management, the Bank has made important changes in its operational processes, including the integration of SEA/GBV provisions into its safeguard and procurement requirements as part of evolving Environmental, Social, Health and Safety (ESHS) standards, elaboration of GBV reporting and response measures in the Environmental and Social Incident Reporting Tool, and development of guidance on addressing GBV cases in our grievance redress mechanisms.

It is to be seen what impact all these efforts have on empowerment of women in India. It is said that strongest action for a woman is to love herself, be herself and shine amongst all those who never believed she could. 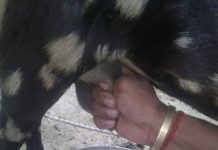