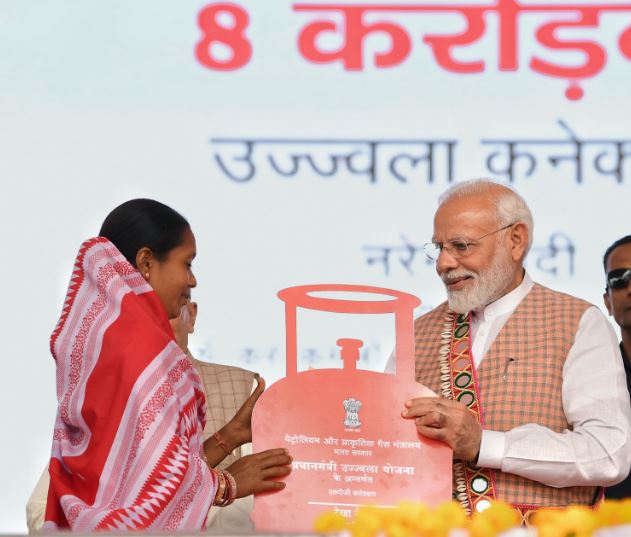 Marking the ahead-of-date achievement of 8 crore LPG connections under Pradhan Mantri Ujjwala Yojana, PM Modi distributed LPG connections to five beneficiaries. Noting that this has been achieved seven months ahead of the target date, Modi observed that in Maharashtra alone, 44 lakh Ujjwala connections have been given. Saluting the colleagues who made this possible, Modi said that we were able to achieve it due to our concern for the health of women suffering from the smoke emanated by chullahs.

Modi added that not only were connections given, but a holistic infrastructure comprising 10,000 new LPG distributors, mostly in rural India, have been appointed. “New bottling plants have been built. Terminal capacity near ports has been increased and pipeline network has been widened. 5-kg cylinders are being promoted. Piped gas is also being delivered. We want to ensure that not a single household remains without LPG connection.”

Addressing the gathering, Modi commended the empowered women present for their contribution towards empowering themselves and their communities through Self Help Groups.

Modi said that Jal Jeevan Mission has been launched in order to free women from the trouble of having to toil hard to fetch water. “Jal Jeevan Mission involves saving water and delivering water at one’s doorstep. The Government will spend 3.5 lakh crore rupees for this, in the next five years”.

Pointing out the importance of public participation in government schemes, Modi said that the government is providing pension to every farmer after attainment of 60 years of age. Similar efforts are being made for vaccination of animals as well, said the PM.

Aajeevika – National Rural Livelihoods Mission creates earning opportunities for women, observed the PM. He added that the Union Budget 2019 has made special provisions to provide interest subsidy to SHGs; Jan Dhan account holders belonging to SHGs will also get an overdraft facility of 5000 rupees, thereby obviating the need for them to approach private moneylenders, the PM added.

Speaking about other initiatives for the empowerment of women’s Self Help Groups, Modi said: “Under MUDRA scheme, one woman in every SHG will get a loan of 1 lakh rupees; this will help them start new ventures and grow their business. Loans worth 20 crore rupees have been distributed till now, out of which 14 crore rupees were given to women. Maharashtra has 1.5 crore MUDRA beneficiaries, 1.25 crore out of which are women”.

Modi highlighted the role of women in ushering positive social change. “You are an important driver of social change. Many steps have been taken for saving girl child, educating and protecting her. We need to make changes in societal outlook, the role of women is important in this. Muslim women are being saved from the bad practice of teen talaaq. You have to create awareness about this.”

On India’s Chandrayaan 2 Mission, Modi said: “Our scientists had decided to achieve a big milestone. I was among them today; they were emotional but they have an indomitable spirit as well. They wish to go ahead on learning from mistakes.”

Stating that the Government wants to provide homes not just houses, PM Modi said: “We want to give you a home of your dreams, not a structure with four walls. We want to give many facilities in it. We worked without any fixed formula and we made homes as per local requirements. We have tried to give all the basic facilities, by integrating the benefits provided under various schemes. 1 crore, 80 lakh homes have already been built. I am confident that when we observe Independence Day in 2022, we will try to give a pucca home to everyone.”

Speaking further on provision of homes, Modi said: “Interest exemption on home loans up to 1.5 lakh rupees has been provided, so that the middle class can have their homes. Photos of houses in various stages of construction have been put on the website, bringing in transparency and removing fund leakages. We brought in RERA Act, to bring in transparency in the real estate sector; the Act has now been notified in many states, lakhs of flats are being made under this”.

Stating that the Government does not want to work in silos but wants to bring all schemes together for development, Modi expressed hope that the people will contribute to the success of Government schemes.

Modi paid his tributes to Umaji Naik on the occasion of his birth anniversary today, stating that he was a great freedom fighter. 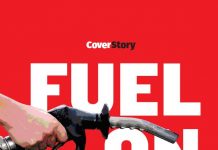