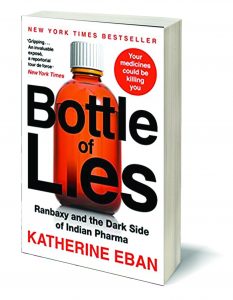 Welcome to a world where cancer patients are sold contaminated chemotherapy drugs, where cholesterol medication has shards of glass in it and a blood-pressure pill contains a live bug. This is no nightmare. This is the ugly truth of Indian pharma’s generic drugs. Such a devastating expose is contained in a recently published seminal book titled ‘BOTTLE of LIES: Ranbaxy and the Dark Side of Indian Pharma’, written by Katherine Eban, a New York based celebrated investigative journalist of global repute.The book is eye opener in its expose that comprises 28 chapters in eight parts and 463 pages.

Trigger of such investigating book came in 2004 when a senior employee of Ranbaxy Laboratories Ltd., then India’s biggest pharma company, discovered a terrible secret that Ranbaxy had been fabricating the test results of its drugs, endangering millions of patients. The concerned employee resigned and became a whistleblower to the US Food and Drug Administration (FDA), a regulator Ranbaxy had been lying to, and ultimately brought the multi-billion-dollar behemoth to its knees. The book describes the sensational account of high-stakes chase to bring Ranbaxy to book and the fall from grace of one of corporate India’s biggest success stories. 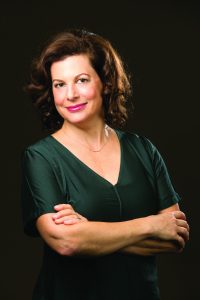 Author Katherine Eban explains how the rot in the Indian pharma is not confined to Ranbaxy alone. She relies on over 20,000 FDA documents and interviews with 240 people to show how fraud and trickery are deeply entrenched in much of the industry in India, and raises troubling questions about some of the biggest names- Wockhardt, Dr Reddy’s, Glenmark and RPG Life Sciences. Investigation in the book reveals shocking and eye opening details that lays bare the ugly truth of Indian pharma. It will make the readers view every pill that they take with foreboding and suspicion.

The book describes majority of the US drug supply comprised generic drugs, of which 40 per cent were sourced from India. It is also revealed that India had played a critical role in manufacturing AIDS drugs cheaply enough that it had allowed governments including the US Government to purchase and supply those drugs to afflicted African nations.

Patients who consumed Indian produced drugs for a range of conditions from depression to heart disease, were all generic, less expensive versions of brand-name drugs, made legally after the patents on those medications lapsed. Despite initial insistence of the FDA that generics were equivalent to the brand and the patients’ reactions were subjective, the author exposed Ranbaxy Laboratories Ltd., a jewel in the crown of Indian pharma, and one of the fastest growing generic drug manufacturers supplying the US market.

In the process, other pharma of India were also found forging data in connivance and in close nexus with the Indian drug regulator through “jugaad” settings with various layers of the drug regulator to fudge the data. It describes profits were their sole motive at the cost of quality and efficacy of generic drugs.TheseIndian pharma manufactured cheap drugs without the required safeguards and then selling them into more regulated and costlier Western markets, claiming that that they had followed all the necessary regulations, firms could reap enormous profits. Author describes the nexus between Indian regulators and the industry is so tight, no one will be able to break it.

The lower quality manufacturing and lax regulation meant that individual Indian patients were getting substandard and ineffective drugs. Poor quality of such generic drugs had a large public health implications: they were contributing to the problem of drug resistance globally. Subpar drugs, which essentially under dosed patients, allowed pathogens to mutate and develop resistance, even to effective drugs.

In this backdrop, there is a lesson for the Union Government and the State Governments that they should not allow substandard generic drugs in public hospitals, public health centres and dispensaries ostensibly to cut costs withoutfirst ensuring rigorous quality control. For such onerous task, official drug regulators must be revamped to make supervisory direction and control mechanism for ensuring qualitative and efficacious generic drugs to improve health quotients.