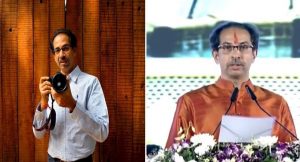 The soft spoken gentleman is also the editor in chief of the fiery Saamana, a prominent Marathi newspaper which was founded by Bal Thackeray.

Born on 27 July 1960 in Mumbai, Uddhav Thackeray is a graduate from JJ school of arts and a published author. He is also a professional photographer whose work has appeared in various magazines and has been showcased at numerous exhibitions.

He was handed over the responsibility of managing the party during 2002 Brihan Mumbai Municipal Corporation (BMC) elections, in which Shiv Sena performed well. It was the first time that anyone saw Uddhav Thackeray’s leadership qualities and flair for politics. He then started working with the party more closely, and was declared as the working president of the party in 2003. In 2004, Bal Thackeray announced him as the next party Chief.

Uddhav Thackeray is married to Smt. Rashmi Thackeray and has two sons, Aditya and Tejas. Elder one Aditya Thackeray is the president of the Yuva Sena and newly elected Member of Legislative Assembly.

Uddhav Thackeray’s photo book Maharashtra Desha (2010), full of breathtaking aerial shots is a glimpse into the cultural fabric, physical beauty and historical perspective of this wondrous state of Maharashtra. Pahava Vitthal (2011) capturing various aspects of rural Maharashtra and the Warkaris during Pandharpur Wari pilgrimage has also been received very well by national and international audiences. He also exhibited a deeper commitment to larger issues when he raised funds for farmer drought relief and wild life conservation through his photography exhibitions.

Having entered politics at a late age, he has had a short span to prove his mettle to his party and the state of Maharashtra. Under his capable guidance, his party swept several local and state elections. Uddhav Thackeray has also managed to the steer the Shiv Sena through thick and thin and commander the ground workers in an effective manner.

# He endeavored to fill potholes of Mumbai formed during rainy season

# Under his able leadership Shiv Sena has started testing and treatment centers for Malaria and distributed medicines.

# To strengthen health services in Mumbai many hospitals have been constructed and started functioning.

# Securing a win for Shiv Sena in the 2002 BMC election while working as the Shiv Sena chief campaigner. Subsequently his party has been consistently performing very well in the Loksabha as well as state elections, where it was a partner in the ruling coalition for last 5 years. He has also expanded the party base and network to include the length and breadth of Maharashtra including local bodies, zilla parishads and other local elections.

# Organizing a successful debt relief campaign for the farmers of the Vidarbha region of Maharashtra. Farmers in the region were under heavy debt following a long dry spell in the year 2007. Shri Uddhav Thackeray stepped in and worked towards improving their conditions when the state and central governments failed to make a difference.

# He has shifted the focus of his struggle to development and welfare of farmers. This has not only expanded his mass base but also made him a prime candidate to lead the state.

# Uddhav Thackeray has succeeded in transforming the image of Shiv Sena to a well-organized mature political formation that is run by someone who deeply cares about the state and its welfare.

# Choosing to spend his efforts on creating an organized and well-grounded political party, Shri Uddhav Thackeray has created a better and forward looking Maharashtra.