Protests by hundreds of devotees at the entrance of Sabarimala temple forced two women to return back on Friday.

The intensified protests by devotees and priests forced the women to turn back 500 metres from the temple.

Journalist Kavitha Jakkal of Hyderabad and Rehana Fathima, activist from Kochi, began their journey today morning towards the hill shrine.

The two women were accompanied by 100 policemen led by Inspector General of Police S Sreejith.

About 30 employees attached to the temple and the chief priest went on protest as they stopped their rituals and sat down in front of the hallowed 18 steps leading to the temple after they heard that the two women were about to reach the shrine.

A request was made to the protesters to disperse and make way for the women to visit the Sabarimala Temple. But the protesters refused to relent and said that they would not allow women of menstrual age to enter the shrine.

Moreover, temple priest categorically conveyed to the police that he would stop the rituals and close the doors of the shrine if there was any violation of tradition and faith.

Henceforth, the women decided to return back after the chief priest threatened to shut the doors of shrine.

The Sabarimala temple opened its doors on Wednesday for the first time since the September 28 Supreme Court verdict that allowed women from the 10-50 age group to enter the famed shrine. 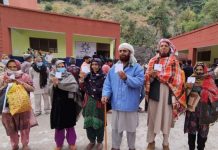