Two Jaish-e-Muhammad (JeM) terrorists were arrested in a joint operation by security forces in Jammu and Kashmir’s Kupwara district on Thursday.

Arms, ammunition with cash were recovered from the terrorists.

Chinar Corps, Indian Army in a tweet said, “Drugmulla, Kupwara. Based on a credible input, multiple joint Check posts were established. Two Jaish terrorists traveling in a car were arrested yesterday late evening, with recovery of an AK with ammunition, two grenades, cash of seven lakh & other war like stores. #Kashmir” 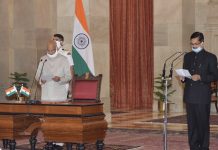