Two men are feared dead after they were swept away by the strong currents in the Mahi Erav river amid heavy rainfall in Rajasthan’s Pratapgarh district, police said Tuesday.

Rescue teams are searching for the missing persons, they said.

The incident happened in Bawdi village of the district when four people were crossing the river last night, police said.

Due to sudden strong current of the river amid heavy rainfall, two of them were swept away, while the remaining two swam to safety, Station House Officer, Ghantali, Sohan Lal said.

He said rescue teams are carrying out operation to find the missing persons.

Those missing were identified as Jeta Delia (25) and Rajeng Singh (22). 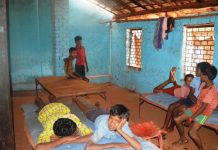