Two-day shutdown beginning Wednesday is being observed  in support of Article 35-A which is facing a legal challenge in Supreme Court of India.

The call for the shutdown was given by the Joint Resistance Leadership comprising Syed Ali Shah Geelani, Mirwaiz Umar Farooq and Yasin Malik.

All shops and business establishments remained closed and the traffic was minimal through the day.

Six petitions are challenging the validity of the Article 35A. A bench headed by Chief Justice Ranjan Gogoi is hearing the matter. He  had posted the matter for hearing in January 2019 but it could not be taken up.

In a tweet, Mirwaiz  said the people of the state will resist every move to tinker with the Article 35A, a constitutional provision that forbids non-state subjects to settle in the state.

“Article 35A hearing scheduled for today and tomorrow in the Supreme Court of India, Kashmir Bar Association top lawyers ready to defend our case, people of Jammu & Kashmir will forcefully resist every challenge by New Delhi to change the demography of the state by rolling back the hereditary state subject laws of 1927 being contested by its agents,” Mirwaiz tweeted.

Similarly, Civil society groups have mobilized to resist any change in the law. In a statement, Kashmir Economic Alliance (KEA) has warned of a catastrophe in Kashmir should the law be tinkered with by the court.

When New Delhi should have been serious to take measures to improve situation through initiation of efforts for final settlement Kashmir in accordance with the aspirations of the people of the state, some hidden forces are hell bent to keep Kashmir on the boil through such sinister petitions, while people are being pushed towards a decisive battle,” KEA chairman Yasin Khan who also heads the Kashmir Traders and Federation (KTMF) said. 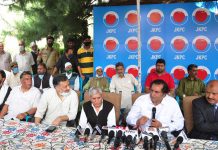