Two CRPF soldiers were killed and three others injured after terrorists opened fire upon the road opening party of the force in Jammu and Kashmir’s Pulwama district on Monday, officials said.

According to the reports the road opening party (ROP) of the CRPF and Jammu and Kashmir Police was fired upon by the unidentified terrorists near Pampore bypass on the outskirts of Srinagar.

Five soldiers were injured and evacuated to the district hospital, where two succumbed to their injuries.

The area has been cordoned off and a search operation is going on. 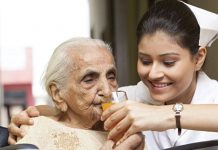