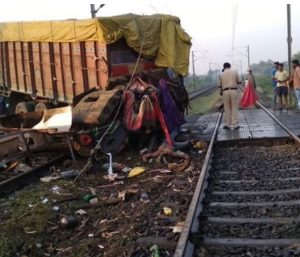 At least two coaches of Trivandrum Rajdhani Express derailed during wee hours on Thursday after a speeding truck rammed into it near Thandla in Madhya Pradesh.

However, no injuries to any passenger has been reported, while the truck driver received serious injuries and later succumbed to death.

According to an official, the incident reportedly happened after the driver of the truck lost control over the vehicle and rammed it into a manned level crossing between Godhra and Ratlam and hit the coaches of the Hazrat Nizamuddin-Trivandrum Rajdhani Express.

Reports say, all the passengers of affected coaches were shifted to the other coaches and 12431 Rajdhani Express has moved from the accident site, leaving the affected coaches.

Restoration work has begun to start the lines at the site.