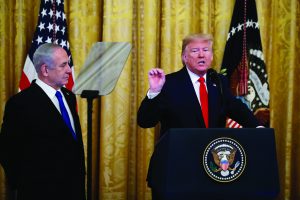 In the contemporary political issues before the American electorate, few may endorse the peace plan. However, a section of Arab leadership including Jordan and Egypt, have not rejected the peace plan. They consider it that it needs wider consultations for making it a genuine, practical implementable document. It was prepared by none other than Trump’s son-in-law, Jared Kushner. Kushner is credited for scripting the peace plan. He takes a comprehensive view of the obtaining ground situation. His aspiration is to usher in permanent peace to trigger off the economy of the strife-torn region. He had been quietly touring various countries to create a huge fund for the revival of the economy with seed money of USD 50 billion. 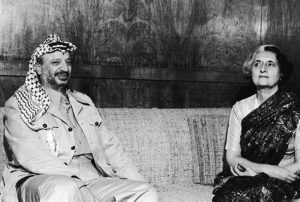 India, a keen supporter of the cause of the Palestinians, has rightly taken a cautious approach. During the Yasser Arafat years, India ignored the pressure of the West to support the legendary leader. During the leadership of Prime Minister Indira Gandhi, Arafat was declared a terrorist by the Western powers, but India and other third world countries, openly supported the legendary leader and his cause of Palestinians.  It had led to the UN recognition of his People’s Liberation Organization (PLO) as the sole representative of the Palestinian people in 1974.

Since its inception, India has always been insisting that Israel is a reality. It goes to the credit of Prime Minister Jawaharlal Nehru, to recognize Israel, but without diluting India’s commitment to support the cause of Palestinians. However, during Nehru’s era and also by his successors, Indian-Israeli diplomatic relations were kept as a low-key affair. It was only in 1992, India and Israel formally established diplomatic embassy-level relationship. It could happen only when PLO recognized Israel’s right to exist as a nation at the Madrid conference in 1991.

With the eclipse of Arafat and the PLO in the Palestinian politics, India’s pro-active role was diluted. It could be due to Palestinian leadership being shifted to HAMAS having close ties with various dreaded Islamic groups. However, India has retained her interest in the economic uplift of the Palestinians. An Indian assistance to the people of Palestine amounting to USD 72 million of financial support and project assistance such as the reconstruction efforts in Gaza, the construction of schools is continuing.

During the past 28 years, since the setting up of the Israeli mission in New Delhi, the proximity between India and Israel has blossomed. With the collapse of the Soviet Union, India’s need for the high-tech weapon systems was met by Israel. It has led to the two countries to become strategic partners. It is often stated that during the post-Arafat years, Indian policy has been more slanted in favor of Israel. It could be attributed to the tie-up among the terrorists of the region with Hamas.

With the change political situation in the region, the Indian reaction on the peace plan is quite cautious. Even the spokesman of the Indian foreign office observed, “We reiterate our view that the final status issues should be resolved through direct negotiations between the two parties and be acceptable to both. We urge the parties to engage with each other, including on the recent proposals put forward by the United States, and find an acceptable two-state solution for peaceful coexistence”.

It is true that the timing of the Trump’s peace initiative is controversial. The American president has rolled out when his presidency is facing existential challenges. Most of the analysts point out that it is difficult to predict the outcome of the peace plan, when the president already beleaguered or under seize for “misusing” his high office for personal political gains that too in an election year. However, it could become a document to save Trump from the Impeachment as well as allow him to win the new term for four years.

The peace package lost much of its shine due to the absence of the representatives of Palestine at the White House, when Trump released the 80-page peace document on January 28-29. T he Israeli Prime Minister Benjamin Netanyahu was with President Trump, but the Palestinian Authority president, Mehmud Abbas, though having the backing of the Western powers, was not invited.

Interestingly, both Trump and Netanyahu are facing serious allegations in their respective countries. Netanyahu is accused for financial bungling, and Trump’s Republican Party members in the senate are trying to stop the evidences which could implicate Trump for misusing his office against his political rivals. While Netanyahu is accused of  giving or offering lucrative official favors to several media tycoons in exchange for favorable news coverage or gifts worth hundreds of thousands of dollars, Trump is stated to be pressuring Ukraine to initiate inquiry against Biden, former US vice-president and a possible candidate for the office of the president  in the elections later this year, and his son Hunter, who reportedly had taken up a lucrative position in the corruption-ridden oil company of Ukraine.

The peace plan is believed to be sequel of the Israeli-Palestinian peace talks held in 2014. The talks had collapsed six years ago, because Palestinians refused to accept Jerusalem as the sole capital of Israel and legitimizing the illegal occupation of Israel on West Bank. However, it offers the recognition to Palestine as a state and is allowed to have a capital on the Eastern side of Jerusalem.

Within American politics, the reaction of the leaders across the party lines varied. If a section of the opposition leaders appeared to ready to discuss it without any prejudices, there were many senior Democrats who just rejected it. Nancy Pelosi, speaker of the House of Representatives, advised to give a chance to the proposals. It may be noted that she had finally referred the Impeachment proposal to the Senate, but her observation on this issue could become a common area among the broad spectrum of political opinion in USA. Her observation, “If there’s a possibility for peace, we want to give it a chance”.

Her initial observations were based on the synopsis of the proposal sent to the law makers before the full 80-page text was released. It was also received initial support from another law maker and a Democrat, Ted Deutch, who stated, “Certainly, it seems to preserve that possibility of a two-state solution”.

Deutch is the chairman of the sub-committee of the Foreign Affairs on Middle-East and Terrorism. Some of the senior Democrat leaders, including Senator Elizabeth Warren, who is seeking the party’s presidential nomination, ripped the administration’s plan, arguing it offered no real future for a Palestinian state. She asserted, “It is just a rubber stamp for future annexation of Palestinian-held territory by Israeli forces, adding that she would oppose any plan that, like Trump’s, was not crafted with Palestinian negotiators at the table. Another Senator Chris Van Hollen, a Democrat, too has debunked the proposal as an “anti-peace plan,” arguing it is “one-sided” to the detriment of Palestinians.

As expected, the British reaction to the peace plan was quite encouraging. Foreign Secretary Dominic Raab stated, “This is clearly a serious proposal, reflecting extensive time and effort.” However, the Russian appeared to be quite cautious. Its deputy foreign minister Mikhail Bogdanov observed, “We do not know if the American proposal is mutually acceptable or not. We must wait for the reaction of the parties.”However, like India, he too asked Israelis and Palestinians to negotiate directly to find a “mutually acceptable compromise.”

The European powers, especially Germany asked for a balanced approach to breaking the deadlock. “Only a negotiated two-state solution, acceptable to both sides, can lead to a lasting peace between Israelis and Palestinians,” Josep Borrell, the EU’s highest-ranking diplomat, said the block will “study and assess” Trump’s plans on the basis of its commitment to a “negotiated and viable two-state solution that takes into account the legitimate aspirations of both the Palestinians and the Israelis.”

The world has to watch this historical initiative, though ill-timed. In a television address, Palestinian President Mahmoud Abbas has dismissed the plans as a “conspiracy”. “I say to Trump and Netanyahu: Jerusalem is not for sale, all our rights are not for sale and are not for bargain. And your deal, the conspiracy, will not pass.” His views were further echoed in the statement of the Palestinian Prime Minister Mohammad Shtayyeh. There are a few optimists, who do not rule out further negotiations among the concerned parties.

In spite of the apprehensions that instead of a win-win for both Israelis and the people of Palestine may not accept the plan. It may become a nonstarter. Diplomacy means negotiations to avert wars. It may become a document to begin negotiations for peace. The cautious approach of India on this issue is shared by most of the world powers, because the two neighboring countries, Egypt and Jordan, have not rejected it. They may use it as a basis for negotiating peace in the region. 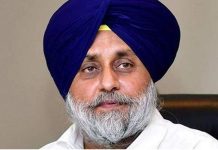 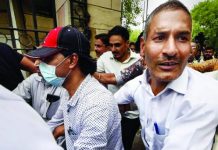