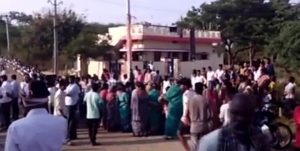 Narayana Reddy, Telangana Rashtra Samithi (TRS) leader, was allegedly stoned to death in Telangana’s Vikarabad and his corpse was discovered on November 6.

According to reports, the leader was involved in an ongoing feud with a rival gang in the village.

However, supporters of the deceased TRS leader attacked a few Congress workers claiming that they were involved in Reddy’s murder. The injured Congress workers were rushed to a local hospital soon after the incident.

As per the reports, the police have ruled out any political motive behind the killing.

Police have reportedly registered a case in the matter and have also deployed cops in the tensed area to maintain law and order situation in the region.