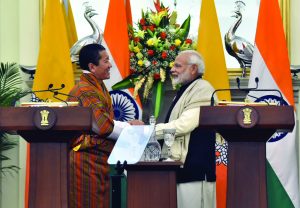 As a mutual gesture, Bhutan’s newly elected Prime Minister Dr Lotay Tshering visited India on December 27-29, 2018, which was his first foreign trip after taking the rein of Royal Government in Thimphu, and the premier returned back with New Delhi’s financial assistance of 4500 crore to the Himalayan nation’s 12th five-year plan (2018 to 2023).

Besides Indian President Ram Nath Kovind and vice-President M Venkaiah Naidu, Dr Tshering had a fruitful discussion with his counterpart Narendra Modi on various bilateral issues. It was reciprocal in nature as Modi too paid his first official visit to Bhutan (also known as Druk Yul in Bhutanese or Land of the Thunder Dragon) after taking oath as the head of Indian Union government in 2014.

Sandwiched between the two giant nations India and Tibet (now under China), the Buddhist nation had been ruled by monarchs, until the Dragon King Jigme Singye Wangchuk himself proposed transforming it to a democratic constitutional monarchy. The Druk democracy witnessed its first-ever elections in March 2008, and prior to that prince Jigme Khesar Namgyel Wangchuck was crowned as the ceremonial Head of the State.

In the 2013 national elections, PDP emerged as the winner and Tshering Tobgay became the second Prime Minister of Bhutan. In the last polls his party too failed to garner supports from the electorate. Tobgay was otherwise a dependable pro-India politician, where Dr Tshering was relatively new comer. During his poll campaigning, the doctor turned politician emphasised only development issues for the Bhutanese nationals.

Dr Tshering had however clarified that Bhutan’s policy towards India would not be changed. Since the days of Bhutan’s fourth King Jigme Singye, the tiny kingdom embraced its southern neighbor as a trusted friend. The present king, Oxford-educated Jigme Khesar, also reiterated his commitment to long standing Indo-Bhutan friendship.

“When the Chinese annexed Tibet in the late 1950s, Bhutan sealed off its northern border,” revealed Gopilal Acharya, a Bhutanese political commentator. Speaking to this writer from Thimphu, Acharya also added that the visit of India’s first Prime Minister Jawaharlal Nehru in 1958 was a watershed moment for Indo-Bhutan relations and since then Thimphu’s ties with New Delhi remains firm.

India’s foreign ministry earlier stated that Dr Tshering’s visit had coincided with the golden jubilee year of Indo-Bhutan diplomatic relationship as both the neighboring countries continued to enjoy exemplary ties of friendship and cooperation, based on utmost trust, goodwill and mutual understanding at all levels. It also expected that Dr Tshering’s visit would provide an opportunity for both sides to review the progress in the multifaceted partnership.

Dr Tshering’s three-day state-visit to India last week was a success as it resulted in New Delhi’s commitment of /Nu 45 billion along with a transitional trade support benefit of /Nu  4 billion over a period of five years and an agreement on the 720-mega watt Mangdechhu hydropower plant tariff at Nu 4.12 per unit, reported Bhutan’s oldest newspaper Kuensel adding that both sides had recognized the importance of continued hydropower cooperation for mutual benefits.

Notably, New Delhi provided /Nu  45 billion along with /Nu 5 billion as financial incentives to Bhutan during its 11th five-year plan (2013-2018).  At the same time, the hydropower projects in south Bhutan, producing over 1400 megawatt electricity, were patronized by New Delhi and most of the products (electricity) have been exported to India as well.

Bhutan has been following a five-year plan system since 1961. These plans articulate the Royal government’s socio-economic development priorities those are implemented over a five-year period. India has closely been associated with the financial initiative in Bhutan since the beginning, where New Delhi solely financed the Thimphu’s first three five-year plans.

Indo-Bhutan kind of friendship and trusts were necessary for resolving the conflict that breed last year at Doklam, a tri-nation junction involving Bhutan, India and China, commented Acharya. Even after Beijing’s critical point of views, the Bhutan government supported New Delhi’s presence over the issue and declined any land-swap deal with the Chinese government, he added.

Mentionable is that Indian troops and China’s armed forces got engaged in a standoff for over two months at the strategically-important Doklam locality. The conflict started on 16 June 2017 following the Indian soldiers’ prohibition for constricting a road by the People’s Liberation Army of China. Finally the Beijing administration asked its armed personnel to retreat and the issue was temporarily resolved on August 28.

Beijing later criticised New Delhi for its intervention at Doklam, saying that the China-Bhutan border issue had nothing to do with India as a third party and it had no right to interfere in or impede the boundary talks between Beijing and Thimphu. China had all along respected Bhutan’s sovereignty and independence, it added.

Dr Tshering, after his arrival in Thimphu, offered thanks to Modi for his gesture mentioning about /Nu 4 billion for strengthening bilateral trade and economic linkages saying that ‘it is a wonderful gift to make Bhutanese trading systems more efficient and make Bhutanese export products in general including industries more competitive in the long run through various trade facilitation measures’.

Lyonchhen, who also met India’s foreign minister Sushma Swaraj, finance minister Arun Jaitley along with other host dignitaries, reiterated his commitment that as a country floating the concept of Gross National Happiness to the world, Bhutan would keep the citizens’ interest for their education, health and a clean environment always paramount.