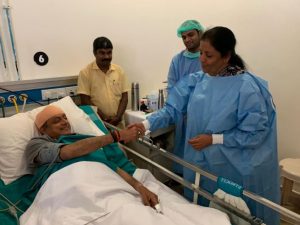 Congress candidate from Thiruvananthapuram, Shashi Tharoor, who is recovering at a hospital after suffering injuries while performing a ritual at a temple had an unexpected visit from Defence Minister Nirmala Sitharaman on Tuesday.

“Touched by the gesture of @nsitharaman, who dropped by today morning to visit me in the hospital, amid her hectic electioneering in Kerala. Civility is a rare virtue in Indian politics – great to see her practice it by example!” Tharoor tweeted.

Sitharaman had reached Kerala on Monday night and held a roadshow at Thiruvananthapuram along with BJP candidate Kummanam Rajashekaran.

Tharoor was injured when the hook of a weighing scale came off and its iron panel hit his head during the “Thulabharam” ritual which he was performing at a temple.

The Congress leader was rushed to the hospital where he received stitches.

Tharoor is likely to be discharged from the hospital today and will resume his campaign.

“Very gracious of my LDF rival C.Divakaran to call this morning to express concern about my well-being. Said he had spoken to the Hospital Superintendent to assure himself I would be ok. “Don’t be demoralised”, Tharoor said.

“I’m not: I’m more determined than ever to see this through!” Tharoor added.

Kerala will vote in a single phase on April 23 in the seven-phase Lok Sabha polls. The counting will take place on May 23.