A top terrorist commander of Hizb-ul-Mujahideen has been killed by security forces in Beighpora village in Jammu and Kashmir’s Pulwama district.

Jammu and Kashmir police in a tweet said, “So far 01 unidentified #terrorist killed. Operation going on. Further details shall follow”

Jammu and Kashmir police in a tweet had said, “Contact established in the third operation at #Beighpors #Awantipur. Top terrorist commander is trapped. Exchange of fire on. Details shall follow..”

Security forces launched a search operation in Beighpora area after receiving inputs about the presence of terrorists there.

Earlier Police in a tweet said, “Third operation launched by Awantipur Police last night on a specific input too is in progress at Beigpora Awantipora. Senior officers monitoring since last night.”

“Operation at Beigpora Awantipur is going on. Any Speculative reporting unconfirmed stuff having law and order bearings is highly irresponsible on the part of some channels. They are advised to hold their guns please,” Police added.

A Jaish-e-Mohammed (JeM) terrorist was arrested at village Satura in Jammu and Kashmir’s Tral area on Tuesday evening.

A joint team of police and security forces apprehended the terrorist at the Satura crossing when he was found under suspicious circumstances. 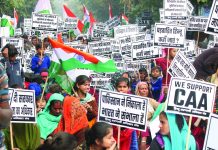