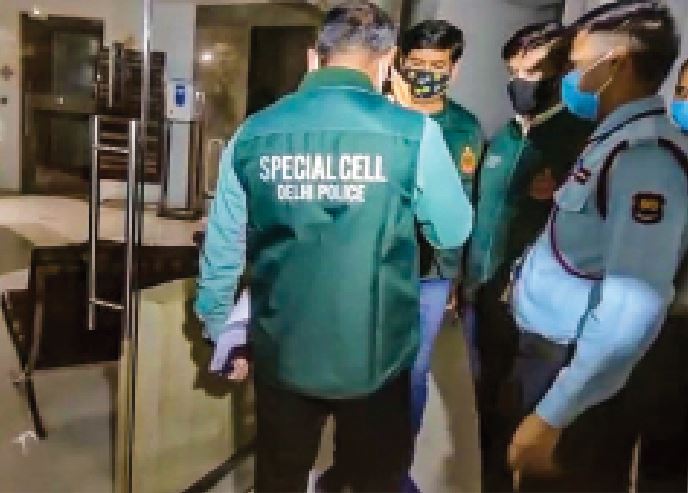 A political altercation between the BJP and the Congress over an alleged ‘toolkit’ refuses to die down as the saffron party alleges that it is aimed at defaming PM Modi over Covid crisis while the opposition terms it a ploy to deflect public focus from the pandemic mishandling, reports AMIT AGNIHOTRI

A political slugfest recently broke out between the BJP and the Congress over a “toolkit” which the ruling party alleged was aimed to defame PM Modi over Covid crisis while the opposition termed it a ploy to deflect public attention from pandemic mismanagement.

The row erupted on May 18 when BJP spokesperson Sambit Patra alleged in a series of tweets that the Congress had prepared a “toolkit”, which urged party workers, volunteers and supporters to use terms like ‘super spreader Kumbh’, ‘not comment on Eid gatherings’, respond to Covid SOS messages ‘only if a person tags the IYC handle’ and ‘use dramatic pictures of funerals and dead bodies which is already being done by foreign media’.

The alleged document printed on the letterhead of the All India Congress Committee research department also advised the Congress social media volunteers to use the term ‘Modi strain’ for the new variant of Coronavirus that allegedly originated in India and raise questions over the 20,000 crore Central Vista project, which includes a house for the prime minister.

Patra’s tweets were later amplified by the BJP leaders. The allegations riled the Congress prompting former party chief Rahul Gandhi to accuse the BJP of spreading lies to divert attention from its failures.

“Vaccines are in short supply and Covid deaths are increasing. The central government policy: Divert attention, spread lies, make a noise to hide facts,” he tweeted.

Patra further alleged the toolkit had been prepared by Congress activist Saumya Varma, who worked in the research department. He added the document had been vetted by party worker Sanjukta Basu.

The Congress then filed a complaint with the Delhi Police Commissioner and urged him to register an FIR against BJP President JP Nadda, Union minister Smriti Irani, senior party leader BL Santosh and spokesperson Sambit Patra over the fake toolkit.

“When our country is devastated by Covid, instead of providing relief, the BJP shamelessly concocts forgeries. These BJP leaders and others in connivance with each other had forged, fabricated and manufactured the said documents on the letter head of the AICC research department and printed such material on the same which has the potential of creating communal disharmony, civil unrest in the country,” the complaint filed by AICC research department head Rajiv Gowda and party’s social media cell chairman Rohan Gupta, said.

“The said document is being utilized by the BJP to spread fake news which has the potential to escalate into violence and fueling hate at the hands of BJP leaders directly,” the complaint said.“In delicate times like this when the nation is fighting to survive against Covid-19, the BJP functionaries are sharing and creating fake news content with the intent to create civil disharmony in the country in order to divert attention of people from the failures of the Modi government in handling the pandemic,” the Congress complaint said.

The BJP president hit back saying “the Congress is a master at dividing society and spewing venom against others. India is seeing Congress’s antics, while the nation is fighting Covid-19.” “I would urge Congress to go beyond “Toolkit Models” and do something constructive,” Nadda said.

Interestingly, the controversy over the alleged “toolkit” surfaced at a time when PM Modi and the Centre was receiving bad press both in the foreign and domestic media for mismanaging the health crisis.

The Congress too has been regularly attacking the PM and the government over mismanaging the second wave of the pandemic during which lakhs of people were infected and thousands were killed.A large number of deaths took place due to lack of oxygen and drugs in the hospitals for critical patients, the opposition party charged.

According to Congress spokesperson Pawan Khera, the PM was only worried about saving his image and not about vaccines and only wanted to attain the position of “vaccine guru” globally.

Khera further charged that such “toolkits” are brought out by the BJP the moment someone raises questions on the government. He said similar things had been done by the saffron party in the past during the agitations involving the students, farmers or the Citizenship Amendment Act.

“Such practices have exposed the ugly face of the saffron party once again,” Khera said, adding that instead of answering questions, the ruling party was accusing those who were raising questions.

“Instead of answering questions, the BJP’s way is to defame and attack those raising questions. That is the BJP toolkit. That is why the country is in such a state today with people dying due to Covid amid shortage of essential drugs and oxygen,” he said.

Noting the government’s priorities was misplaced, the Congress leader said had it spent half of this time in helping those affected by Coronavirus, the country would have been far better.

Stepping up pressure on the BJP, on May 19, Akash Sharma, head of the Chhattisgarh unit of NSUI, the Congress students wing, filed a police complaint in Raipur against Sambit Patra and former chief minister Raman Singh, alleging forgery in the toolkit case.

The case under Sections 469 (forgery for the purpose of damaging reputation), 504 (intentional dishonour with intent to breach peace), 505 (1) (b) (spreading  rumour with intent to create fear) of the Indian Penal Code was recorded and both the BJP were later sent notices. A similar case was filed in Rajasthan’s capital Jaipur by Congress leader Jaswant Gurjar.

The Opposition party also wrote to Twitter and urged the social media platform to remove tweets by Sambit Patra and other BJP leaders and suspend their accounts permanently for “spreading misinformation and unrest in society”.

Later, when Twitter marked Patra’s tweets as “Manipulated Media” the government asked the social media platform to remove the tag saying it was “prejudged, a clear overreach and unwarranted.”

The Ministry of Electronics and IT, in a reported communication to Twitter, objected to the use of the “manipulated media” tag on “certain tweets made by Indian political leaders with reference to a toolkit created to undermine, derail and demean the efforts of the government against Covid-19.”

The government said that veracity of the alleged “toolkit” was being probed and Twitter should not have passed judgements before that.

“The investigation will determine the veracity of the content, not Twitter. Twitter should not interfere in the investigation process. Twitter cannot pass its judgment while the matter is under investigation.” While the investigation was still on, Twitter “had unilaterally drawn a conclusion in this matter and arbitrarily tagged it as ‘Manipulated Media’”, the government said.

The Centre reportedly told the social media giant that “such content moderation by Twitter had put a question mark on it as an intermediary and its credibility as a neutral and unbiased platform facilitating the exchange of views by users.”

While in most cases action is restricted to labelling, the posts can be removed if they check all the boxes – found synthetic or manipulated, shared in a deceptive manner, and likely to cause harm.

In the age of social media campaigns, a toolkit refers to a set of documents often used by activists on how to register their protest over an issue and lists the points to be flagged.

In the case of Bengaluru student activist Disha Ravi, who was arrested but got bail later, the toolkit became an accidental disclosure when teenage green activist Greta Thunberg on  February 5 shared a Google document a “toolkit, inadvertently.The toolkit tried to “explain the farmers’ protests” against the Modi government on the Delhi borders over the farm laws passed by Parliament in 2020.