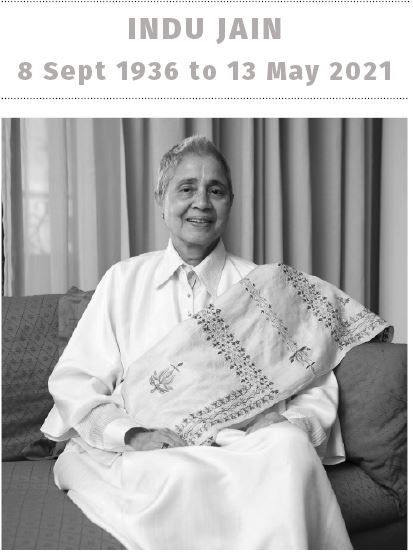 Chairperson of the Times Group, Indu Jain, a lifelong spiritual seeker, pioneering philanthropist, distinguished patron of the arts, and passionate proponent of women’s rights, is no more. She attained nirvana on May 13, 2021.

In a statement issued by the Times Group, it said that she was a “lifelong spiritual seeker, pioneering philanthropist, distinguished patron of the arts, and passionate proponent of women’s rights”. It said that after “becoming chairman of the Times Group in 1999 she evolved a distinctive leadership style, characterized by compassion and inclusiveness, that helped propel the group to new heights”.

President of India, Ram Nath Kovind in a tweet said, “In the demise of Smt Indu Jain, Chairperson of Times Group, we lost a unique media leader and a great patron of art & culture. She left her special imprint in the areas of entrepreneurship, spirituality & philanthropy. Condolences to her family, friends and admirers”. Paying tributes, PM Modi said, “Saddened by the demise of Times Group Chairperson Smt. Indu Jain Ji. She will be remembered for her community service initiatives, passion towards India’s progress and deep-rooted interest in our culture. I recall my interactions with her. Condolences to her family. Om Shanti.”

Among many spiritual kings who were her soul-mates, she was ardent follower of Sri Sri Ravi Shankar and Sadhguru Jaggi Vasudev. Her longest association was with religious leader and founder of Art of Living Foundation, Sri Sri Ravi Shankar and incidentally she attained nirvana on his birthday. In his tribute, Sri Sri Ravi Shankar said, “My association with Indu Ma began in the 1980s and one of my earliest memories of her was her insatiable curiosity for all things spiritual. Every satsang was dominated by her endless stream of questions emanating from the study of the scriptures and a deep quest for the highest. I had never met any businessman or woman with such a passion for spiritual wisdom, knowledge and atma gyan. A sincere seeker, a media baron and a promoter of art and culture, Indu Jain will be remembered for her outstanding contribution to spirituality and humanism”.

Born in a Sahu Jain family in 1936, Indu Jain was married to the late Ashok Kumar Jain, former chairman of Times Group or BCCL. The Times Group includes The Times of India, Navbharat Times and Economic Times newspaper apart from news and entertainment channels such as Times Now, Mirror Now, Movies Now, Zoom and Romedy Now. She set up The Times Foundation in 2000, with sustainable development and transformational change as its key goals.

She was the founder president of FICCI Ladies Organization (FLO), established in 1983 to promote entrepreneurship and professional excellence among women in India. From 1999, she also served as chairperson of Bharatiya Jnanpith Trust, founded in 1944 by Sahu Shanti Prasad Jain, her father-in-law, to promote literature in Indian languages.

She received many honours, including the Padma Bhushan in 2016. She was conferred a Lifetime Achievement Award by the Institute of Company Secretaries of India in 2019, an award for Lifetime Contribution to Media by the All India Management Association in 2018, as well as a Lifetime Achievement Award by the Indian Congress of Women. In 2000, she also addressed the United Nations at the Millennium World Peace Summit.

Like a seer, she had premonition of her nirvana and in her own words, “If there is a last wish, It is this. No one should be informed of my departure. No one needs to ask “where is Indu?” Because, wherever there is laughter, they will find her there. The body’s soulless shell can be cremated in whichever way the ashramites feel best — my guru will surely wing to my side from wherever he is. Then, I will fly, flirting with the fire, land, water, air and space in a long-awaited meeting-mating milan. Always me in you. Love — Indu Jain.”