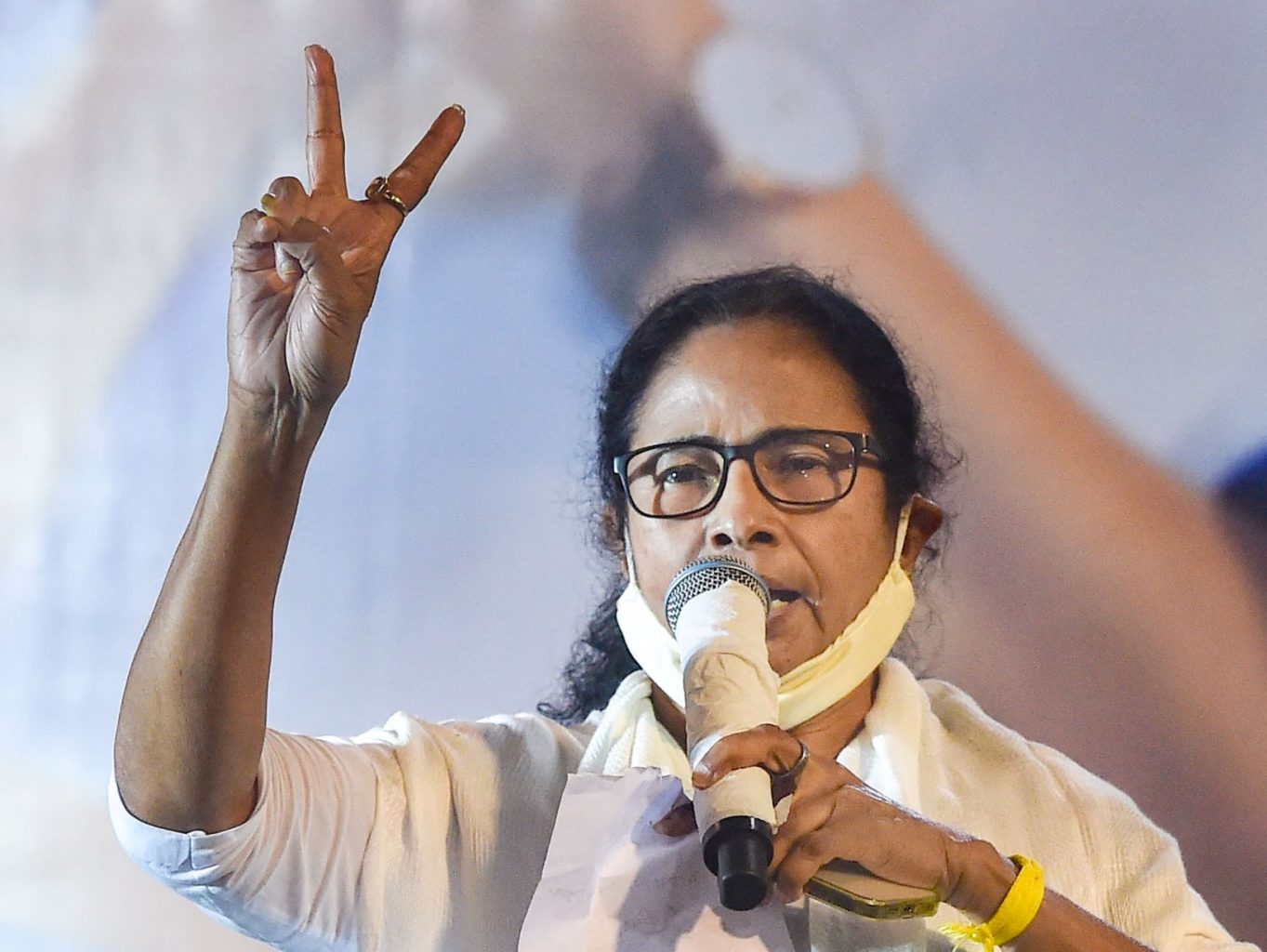 Having proven itself electorally and its ranks swelling by the minute, there is little room for doubt that if any Party “can do it” as it were, it is the TMC; if any leader has the mettle, it is none other than Banerjee.

West Bengal Chief Minister Mamata Banerjee’s coinage of the slogan “B for Bhabanipore, B for Bharat” cannot be dismissed as an electoral gimmick. If anything, it has major political connotations that go well beyond a by-poll in her home state.

Roughly interpreted, it could mean that Bhabanipur is the first step to the wider goal of politically conquering India: a kind of a side-show to the bigger electoral drama that would unfold in 2024 when the general elections are due in the country.

Apart from Banerjee’s present residence in Kalighat being part of the Bhabanipur constituency, there are several memories linked to her formative years, including her doing a part time job at a milk booth. Pitch this against Prime Minister Narendra Modi’s starting off as a chaiwala only to find that unlike Modi, Banerjee does not cash in on her humble beginnings.

Bhabanipur and Mamata go back some 60 plus years. Not only did she grow up and study here, but also started her student politics from its streets. Later she represented the constituency as an MLA.

Bhabanipur is also part of the Lok Sabha constituency that elected Banerjee five times over. It is, therefore, not without reason that she is seen as Bhabanipur’s “ghorer mein” or daughter of the house. In other words, one of their own. After losing Nandigram in May, it was necessary for Banerjee to get elected within six months to be able to continue as Chief Minister.

In the recently concluded Assembly elections, Bhabanipur was wrested by Trinamool Congress’s Sobhandeb Chattopadhyay but he stepped down to make way for Banerjee.
Banerjee won the Bhabanipur seat with an impressive margin. Her bete noire Bharatiya Janata Party had put up lawyer-turned-politician, Priyanka Tibrewal to face her.

That Tibrewal was no match was a given. She had lost the recent assembly polls from Entally. In any case, the decision to field her against Banerjee was a non-starter. Post her defeat, several leaders questioned the party’s decision to pitch a lightweight against Banerjee. Tibrewal’s naivety was best demonstrated when despite the rout, she called herself the “man of the match” whatever that is supposed to mean.

But then the Bhabanipur election was not limited to a Banerjee versus Tibrewal contest. Rather, it was an outreach to an electorate that needed to be wooed and one that is crucial to Banerjee’s acceptance as a leader outside her home state of West Bengal. And this is where the big-picture story comes in.

That Banerjee would win Bhabanipur was a foregone conclusion. Yet she did a door-to-door campaign, visiting religious places including temples, mosques and even gurudwaras.
The significance of this cannot be undermined given that a big chunk of the voters are non- Bengalis, comprising Hindus, Sikhs and Muslims and that too Hindi speaking. Therefore, for Banerjee to refer to this as a “mini-India” has relevance on grounds that there are people from Punjab, Odisha, Gujarat, Rajasthan, Uttar Pradesh and Bihar who live here. Apart from exclusively reaching out to these segments, Banerjee’s bid was also to recast herself in a mould that connects to a non-Bangla speaking electorate.

That their votes were crucial to this election is a given. But more important is the political message of this election, read the willingness of the non-Bangla speaking people to accept Banerjee as a leader. It is this narrative that the TMC intends to cash in on, in the elections it is preparing to contest outside West Bengal in the near future.

In this strategy was also embedded a “corrective” as it were: the need to appease those sections that were irked with Banerjee’s “outsider” remark.
In the last elections, Banerjee had dubbed BJP’s top brass flying in from Delhi to campaign in West Bengal as “outsiders” which led to speculation among the non-Bangla speaking people whether the TMC considers them outsiders in a state that is their home. Also, the BJP’s influence over the Hindi speaking electorate in this constituency was a roadblock to TMC wresting control of all the wards. For instance, in 2016, the TMC had lost in two wards of the eight in Bhabanipur.

However, this time around History did not repeat itself. The party managed to wrest all the eight wards in the constituency: a point Banerjee specifically mentioned after her win: “This is the first time we did not trail in any of the eight wards” a smug Banerjee said, even as she expressed gratitude to the electorate for reposing faith in the Trinamool Congress.
That Bhabanipur win goes beyond Bengal is a given. It should, therefore, not be seen from the prism of merely securing Banerjee’s office as Chief Minister. That is only a small part of the story. The main plot is to see it as a step-up to realize the Delhi-dream as it were. Add to this Banerjee’s own assertion that the “nation was watching this election alongside Bengal” and the political significance is clear.

Banerjee was not off the mark. Since her spectacular victory in the Assembly elections, she has taken a leap: from being a state leader she has emerged as one who is now ready to don the national mantle.

Simply put this means that Banerjee has come of age and seems to be the only one who has the capacity, nerve and grit to politically challenge Prime Minister Narendra Modi.
Even though this should be a god sent opportunity for a fragmented Opposition, they don’t seem over enthused at the prospect of the diminutive lady turned giant slayer taking the lead.

Irrespective, Banerjee is raring to go: hell bent on responding to what she terms as the “Call of Delhi”. This, she states, is TMC’s “new challenge”.
In an article in TMC’s very own Jago Bangla, Banerjee writes that the people are dreaming of a new India around the TMC.

Claiming that the party is receiving calls from other states, Banerjee said that these have to be responded to and people’s wishes fulfilled. In the same strain she points to the Congress’s failure to take on the BJP on the national stage.

Banerjee’s message is loud and clear: the Opposition should shift focus from the Congress and look elsewhere.
Having proven itself electorally and its ranks swelling by the minute, there is little room for doubt that if any Party “can do it” as it were, it is the TMC; if any leader has the mettle, it is none other than Banerjee.

The writing on the wall is clear as is the political message. Had that not been, leaders by hordes would not be joining the TMC: some new entrants like Sushmita Dev and Luizinho Falerio from the Congress and Babul Supriyo from the BJP. For others like Mukul Roy, Biswajit Das and Sabyasachi Dutta, it is a kind of homecoming given that they were initially with the TMC, had jumped ship but returned to the fold after TMC swept the state polls.
While Dev will do the groundwork for the TMC in the North east, Falerio would be useful in Goa. A seven-time MLA and a former Chief minister, he has a substantial following among Christians in the state.

None of them come alone: they bring with them a substantial number: Sushmita Dev’s joining TMC led to over 500 Congress workers from Assam to join the Trinamool Congress alongside senior Congressmen from her father’s team too. During the Congress regime, Dev’s father Santosh Mohan was a Union minister. Falerio, on the other hand, facilitated nine Congress leaders to join the TMC and is still counting. Both Dev and Falerio spoke about their respective states “needing Banerjee”.

While the entrants’ theme song is to flag Mamata as a saviour, the TMC, be it through its editorials or word of mouth, is drumming support to project Banerjee as the face of the Opposition in a run up to the 2014 elections.
Post its spectacular victory in the Assembly polls, its days of being a regional party are kind of over. The party is now all set to create a national footprint for itself.

The script: look beyond Bengal, work towards a debut in other states, and use the Didi trademark to showcase her as a viable and desirable alternative to Modi and the BJP which is divisive and destructive.
It is this sentiment that resonates all through be it the leadership or the Party’s rank and file. To quote Sudip Bandopadhyay, MP: “Rahul Gandhi has failed to be the face against Narendra Modi. So Mamata Banerjee is that face. We will project our leader as the alternative face across the country”.

On this, however, the TMC and the Congress are not on the same page. An incensed Adhir Ranjan Chowdhury, Lok Sabha MP, has alleged that Banerjee is “trying to turn Congress to Congress (M) by inducing and alluring Congress leaders” from all over.
Even as the needless us versus them battle rages, it must be understood that Rahul Gandhi is no match to Banerjee. To compare the two would be imprudent, to say the least.
Banerjee is several notches above, both as a politician and a leader. Like his father, Rajiv Gandhi, Rahul is a good man in the wrong profession. He has a long way to go before he learns to fix the nuts and bolts.

On the other hand, Banerjee is adept at the game, given that she started her career in the seventies and graduated from a street fighter to Chief Minister and perhaps Prime Minister in waiting. To the last, there may be ‘ifs and buts’ but it is a possibility that at this stage cannot be ruled out. This may be easier said than done but the clock is ticking and to use the popular phrase, the time starts now…

However, much depends on Banerjee. She needs to act deftly and play her cards skillfully. But more importantly, she needs to look beyond the Congress, rather than playing second fiddle to it. If it is on board, it should be on her terms and if not, Banerjee must not forsake the chance of leading from the front. Under no circumstances should she fritter away the well- earned advantage of people outside Bengal seeing her as a possible alternative to the current dispensation. If she does not clinch it this time around, then she will only have herself to blame.