Uttar Pradesh (UP) government in an affidavit on Wednesday informed Supreme Court that the Hathras victim’s family has been given three-layered security. UP government also requested the apex court to monitor the Central Bureau of Investigation (CBI) probe in the 19-year-old woman’s alleged gang rape and murder.

UP government informed the apex court that CCTV cameras have been installed to keep round-the-clock surveillance around the victim’s house and sufficient policemen are deployed to ensure protection to the family members of the victim.

The State government also informed the Supreme Court in the affidavit that there was no intrusion in the family’s privacy. The family members are free to move around and meet the people they want.

A team of CBI on Tuesday reached the 19-year-old victim’s village Bulgadhi in Hathras and inspected the incident site.

The victim’s brother was also brought to the incident site for investigation purpose.

The apex court is scheduled to hear the matter on October 15. 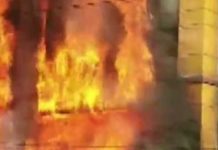