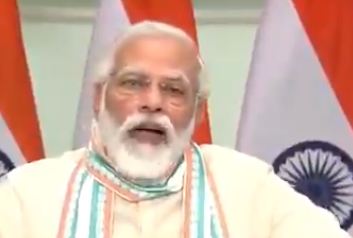 Prime Minister Narendra Modi on Sunday in his 13th Episode of ‘Mann Ki Baat 2.0, talked about giving a befitting response to China on Ladakh. In his address PM said, “the way India extended a helping hand to the world during difficult times, it has reinforced India’s role in ushering in peace and development. This period also saw the world realising India’s spirit of universal brotherhood…at the same time it also noticed India’s commitment and might when it comes to safeguarding her sovereignty and territorial integrity. Those who cast an evil eye on Indian soil in Ladakh have got a befitting response. India honours the spirit of friendship…she is also capable of giving an appropriate response to any adversary, without shying away. Our brave soldiers have proven that they will not let anyone cast an evil eye on the glory and honour of Mother India.”

Paying tributes to the martyrs of galwan valley, PM said, “the entire country comes together in paying tributes to the bravery of our jawans who attained martyrdom in Ladakh. The entire country bows to them in reverence, with gratitude. Just like their family members, every Indian painfully regrets the loss. The inner sense of pride that families feel on the supreme sacrifice of their brave sons…their sentiment for the country, constitutes the true power, the might of the country. You might have seen parents of martyrs referring to sending other sons, other young family members too, to join the army. The words of the father of Shaheed Kundan Kumar of Bihar, keep echoing. He had mentioned sending even his grandsons to the army to defend the country. This spirit permeates across all martyr families. Truly, the sense of sacrifice displayed by these family members is worthy of veneration. The resolve with which our jawans made the supreme sacrifice for the security of Mother India, should be the aim of our lives….and this applies to each and every one of us. Our pursuits and endeavours should be in the same direction…we should strive towards enhancing the country’s capabilities and capacities in safeguarding our borders. A self-reliant India would be a tribute to our martyrs in the truest, deepest sense. Rajni ji has written to me from Assam. She says, after watching what happened in eastern Ladakh, she has taken a vow…and the vow is that she will buy only ‘local’….and for the sake of ‘local’, she will also be vocal. I am receiving messages on these lines from every corner of the country. Many have expressed through their letters that they have adopted this very path. Similarly, Mohan Ramamurthy from Madurai, writes that he wishes India to be self-reliant in the defence sector.”