AN ENGINEERING student forced to give up studies because of cases of sedition and terrorism against him, 22-year-old Moutasim Billah of Hyderabad would do a lawyer proud with the way he reels out sections of the Indian Penal Code. Sadly, Billah is familiar with these sections only because he has suffered them for seven years. Billah was arrested on March 5, 2008, after his name came up in alleged confessions of other young Muslims randomly arrested and tortured with electric shocks by the police during investigations of last year’s bomb blasts in Hyderabad. Nine people were killed in the May 2007 blast outside a mosque called Mecca Masjid near the Charminar. Forty more were killed in two simultaneous blasts at a snack shop and in a park in August.
When the police found no grounds to implicate Billah in the two blasts, they slapped a patently bogus case on him, saying he and the other men secretly met at a cemetery to hatch a terrorist conspiracy and incite Hindu-Muslim violence. The police claim to have raided the meeting and arrested seven persons, but say Billah absconded — until his arrest in March. He was in prison for 90 days until the High Court gave him bail. The only evidence cited against him were some “inflammatory” CDs allegedly found in the cemetry.
“The police want Muslims boys to always stay in jail on some pretext or the other,” Billah told TEHELKA in an interview on June 12, 2008 at his home in Hyderabad, just hours after he was released. Billah’s narrative is a good primer on how the Indian police trap innocent people and makes their lives a living hell. His story began when as a 15- year-old, Billah joined demonstrations in Hyderabad called by local Muslims in 2001 to protest US President George Bush’s decision to invade Afghanistan. For some reason, police decided this was a crime in India. They registered cases against scores of protestors, including Billah. Despite there being no independent witnesses or evidence, the case has dragged on for seven years, during which Billah has attended more than 50 hearings. In 2002, he joined another protest, bringing on another FIR that is still a live grenade.
In 2004, a tragic event occurred. Billah was its victim, but the police made him an accused and slapped serious charges on him. Readers will recall that last week TEHELKA exposed the police lies against Maulana Nasiruddin of Hyderabad and two of his sons, all of whom are in jails in different states. Billah’s family and Maulana Nasiruddin are neighbours in the Muslim neighbourhood of Saidabad in Hyderabad. To recap: in October 2004, Nasiruddin went to the local police station for a routine attendance in an earlier case when policemen from Gujarat waiting there arrested him on a charge of conspiracy to enact terror in that state, including the murder of its former home minister, Haren Pandya.
When a few Muslims who had accompanied Nasiruddin to the police station protested, a Gujarat police officer fired at them, instantly killing one protestor. That protestor was Billah’s older and only brother. Forget about getting justice for his brother’s death, Billah was made an accused in the criminal case filed against the protestors, charging them with the very serious crime of obstructing police officers from doing their duty: in this case, taking custody of Nasiruddin. The protestors forced the police to file a case against the Gujarat officer. Billah is listed as an eyewitness in that case. 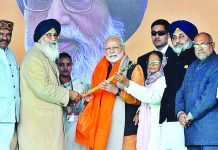