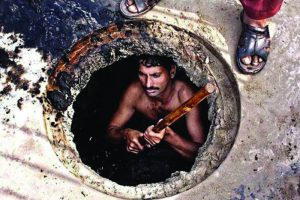 Almost everyone knows it’s illegal. Yet it happens so often that neither media nor general public or the people in authority bother to take note of. Going by the latest numbers collated by the National Commission for Safai Karamcharis, the statutory body that was set up by an Act of Parliament for the welfare of sanitation workers, one person has died every five days, on an average, while cleaning sewers and septic tanks across the country since January 1, 2017.

The Employment of Manual Scavengers and Construction of Dry Latrines (Prohibition) Act, 1993 and the Prohibition of Employment as Manual Scavengers and their Rehabilitation Act, 2013, do not help much as they are openly and regularly violated. According to the Section 7 of the latest Act, a violation may result in two years of jail or fine or both. Under the provision, no person, local authority or agency should engage or employ people for hazardous cleaning of sewers and septic tanks. Mechanised cleaning of septic tanks is the prescribed norm. But who cares?

Even the high-profile sanitation campaign ‘Swachh Bharat’ has done little to alter ground realities when it comes to cleaning of sewers. Six people died while cleaning sewers in the national capital in 10 days, highlighting official apathy towards the issue. Situation in other states of the country is not much different. As per the Ministry for Social Justice and Empowerment, the country saw 300 manual scavengers die in 2017. Of these, 12 deaths occurred in Delhi and 140 in Tamil Nadu, which was the highest. Nothing has changed since then.

The Socio-Economic Caste Census of 2011 records the presence of 740,078 households where waste and excreta is cleared out by manual scavengers. This number does not include the septic tanks, public sewers and railway tracks which are also mostly cleaned by them. Moreover, 21 lakh households dispose of their wastes in dry latrines or drains, which also are cleaned by these collectors. The 2011 Census counted over 1.82 lakh families that had at least one member employed in this ‘profession’.

Manual scavenging is not only a caste-based but also a gender-based occupation with 90 per cent of them being women. Households with dry latrines insist for females for cleaning work instead of men as they are located inside the house. A Human Rights Watch report recently pointed out that women, on an average, get paid as little as between 10 and 50 every month per household. It is much less than men who earn up to 300 a day for cleaning sewers. 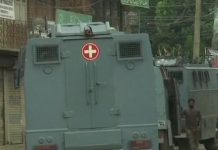