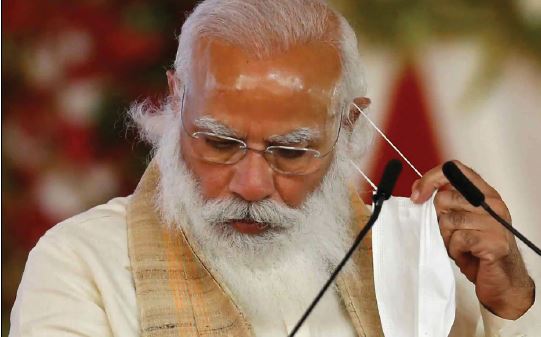 On your birthday, your party is organising a “Thank you, Modi “ campaign. 5 crore “thank you” postcards are going to be sent to you for all that you have ostensibly done for the poor. In addition, many other programmes are being organized. It reminds me of a day many decades ago when Jyoti Basu, then Chief Minister of Bengal, was asked whether he would agree to some organisations celebrating his birthday with public functions. His answer was that he was an elected leader, not a monarch whose subjects had to show their loyalty to the king by celebrating his birthday.

But leave aside cultures of sycophancy promoted by such celebrations. Your party has also announced that ration bags will be distributed with your photograph printed on them. An official scheme of provision of foodgrains mandated by law is thus sought to be hijacked by your party. Also, who has produced the foodgrains that will be in those ration bags? Would it not have been more appropriate to have photographs of the country’s annadatas? We understand that acknowledging the contribution of kisans would draw attention to many realities unpleasant for you to be reminded of on your birthday. The fact that kisans have been protesting for more than nine months against three farm laws passed by you without even asking their opinion; that 700 kisans have died in the struggle; that adding insult to the injury caused by uncontrolled increased prices of inputs for agriculture, you have raised the MSP for wheat by only 2 per cent, the lowest raise in 12 years; that even three years after the announcement of PM Kisan Nidhi, the coverage is of 10 crore farmers whereas the official assessment is of more than 14 crore eligible farmers, so one third farmers are still denied benefits. The list is long enough for your party to not highlight the kisan on your birthday, leave alone put a kisan’s photograph on a ration bag.

What about the worker, Modi-ji? How does your party intend to mobilise workers for your birthday celebrations? 12 crore workers who lost their jobs between your last birthday and this one; lakhs of migrant workers who were deserted and stranded by your government when you announced a sudden lockdown without warning or notice; crores of workers who have been left to the arbitrary actions of employers through the dismantling by your government of a legal framework won through decades of struggle and sacrifice; the imposition of four labour codes which are a euphemism for a code to protect employers; the drastic alteration of the labour market through the contractorisation of the workforce led by central government departments and concerns. No, it is not likely that the worker who produces this country’s wealth will be a willing signatory to a postcard thanking you.

The woman in the home and in the field was the biggest loser being pushed out of the labour market during this pandemic; her’s was the face reflected in the unprecedented fall in household consumption expenditure evidencing the suffering of households. India recorded the sharpest drop in expenditure in the last forty years, and it was the women of India in this patriarchal setup who bore the greatest burden of family deprivation. Even today, with the unprecedented hike in prices pushed by the increase in excise duties on petroleum products by your government, it is she who suffers the most when the prices of essential commodities skyrocket, as they have. Those who benefitted from receiving a gas cylinder under the Ujjwala Yojana are unable to use it because the subsidies are not enough to cover the huge increase of the price of a gas cylinder by over 100 per cent in five years. How should she celebrate your birthday?

The Adivasi displaced from her land by a project handed over to one of your corporate friends, a Dalit family still awaiting justice after your party-run government protected criminals in covering up the horror of gangrape and murder of their daughter – these are realities in people’s minds when asked to thank you. Citizens of India hounded, demonized, beaten and even lynched because they happen to be Muslims – will your workers distribute postcards to them to thank you?

And most of all, Modi-ji, do you really think such orchestrated celebrations will help wipe out the horrific human suffering in those months in March, April and May when India gasped for breath, hit by the shortage of oxygen supplies because you were busy campaigning for your party while India was consumed by the dreadful, though predicted, second wave of the virus?

Will your party be upfront and transparent about the funds they will be spending? Till today, the PM Care Fund accounts are shrouded in secrecy. The source of the huge money collected through the non-transparent system of electoral bonds is also hidden from the public. Given the involvement of BJP ministers in central and state governments in the birthday celebrations, the apprehension that public money will be used directly or indirectly are not far-fetched. Will the expenditure be made public?

Personal birthday greetings are certainly in order, Modi-ji, but not the public spectacle your party wants to impose on the people of India.

The opinions expressed within this article are the personal opinions of the author. The facts and opinions appearing in the article do not reflect the views of Tehelka and Tehelka does not assume any responsibility or liability for the same. The article first appeared in NDTV.