There is a painting being hung up at the Lalit Kala Akademi. From afar, it looks like a rose. As one gets nearer, it flowers into nude figures of women in joyous abandon. In Bloom is one of the strongest works in artist Roohi Kapoor’s upcoming solo show Bloom; opening at the Lalit Kala Akademi, New Delhi, on 28 March. It took her three years to get there and her excitement is palpable. “It was worth the wait. It is one of the best places to display your work,” she says.
Bloom takes off from her previous exhibition, Mindscapes (November 2011). Kapoor, 26, has branched to experiment with techniques, but her penchant for bold, vivid colours remains. Over the past year and a half, she has been filling her canvases with the female form, elements of nature and a dreamy blend of reality and fantasy. Though not trained formally in art, her work is informed by her degree in sociology at the University of Nottingham, where she wrote a thesis on women in cinema. “That’s how I got interested in the representation of the female form. Even when I was writing, I would be painting these figures on the side.” Thematically, her use of women segues into the contemporary art practice of celebration of the female form in nature. It’s her tangible skill with technique that makes her stand apart. In Bloom employs illusion along with anatomy drawing, as does Free Rooted, where women meld into each other to form a tree.
“I’m focusing on drawing anatomy and the illusion technique for now. But I have used other styles, such as the dripping style, automated drawing and a style where you create figures using blocks of colours without initially drawing the outline,” Kapoor says of her work. These, she learnt through her unconventional education in art. After university, she has regularly attended various short courses such as those at the Triveni Kala Sangam, a restoration course at the National Museum in New Delhi, and one on portrait painting in Florence. She got her big break in 2008, at a group exhibition in London, Canvas India, curated by E-Paintings, her mother’s company. Like her art, Kapoor’s mind works free from boundaries and restraints, gathering lessons from all over the world, experimenting with her peers and letting all that she learns percolate into each other to form something new. “It’s hard to create your signature style in the art world, but that is what Roohi is doing,” says her mentor, Delhi-based art consultant Shail Singh. “She paints freely, and paints what she loves. Her recent experiments with shapes and forms, and her graduation to bigger canvases have added a new scale and dimension to her art.” That’s probably what has attracted some of her regular collectors, such as Delhi-based businessman Devan Jain who has bought some of her bigger canvases (nearly 5×3 ft) for around 30,000, from previous shows.

Such scale can be seen in her more figurative pieces, such as Tangerine Dream, created using the dripping style. Kapoor splashed paint onto the canvas in colours that appealed to her, moved it around to spread it, only stopping after it took a shape that looked complete to her. After it dried, she painted on top of it, giving the background an eye-catching tieand- dye effect. Since large canvases take months to complete, she worked on multiple paintings at a time, so as to not lose any of the ideas her head was teeming with.
It is hard to find a central connecting narrative in her show. However, experimentation is how she is “developing her visual language” as architect- turned-graphic designer Ron Brinkers puts it. He calls her works “pictorial magic realism”. Brinkers curated Mindscapes and helped her self-curate Bloom. Curation is a skill that Kapoor confesses she is veering towards, and will try out on a more challenging scale when curating a group show in October. Her direction may seem haphazard, but for Kapoor, the urge to try out something new is what informs her art.
aradhna@tehelka.com 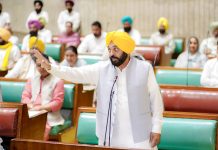