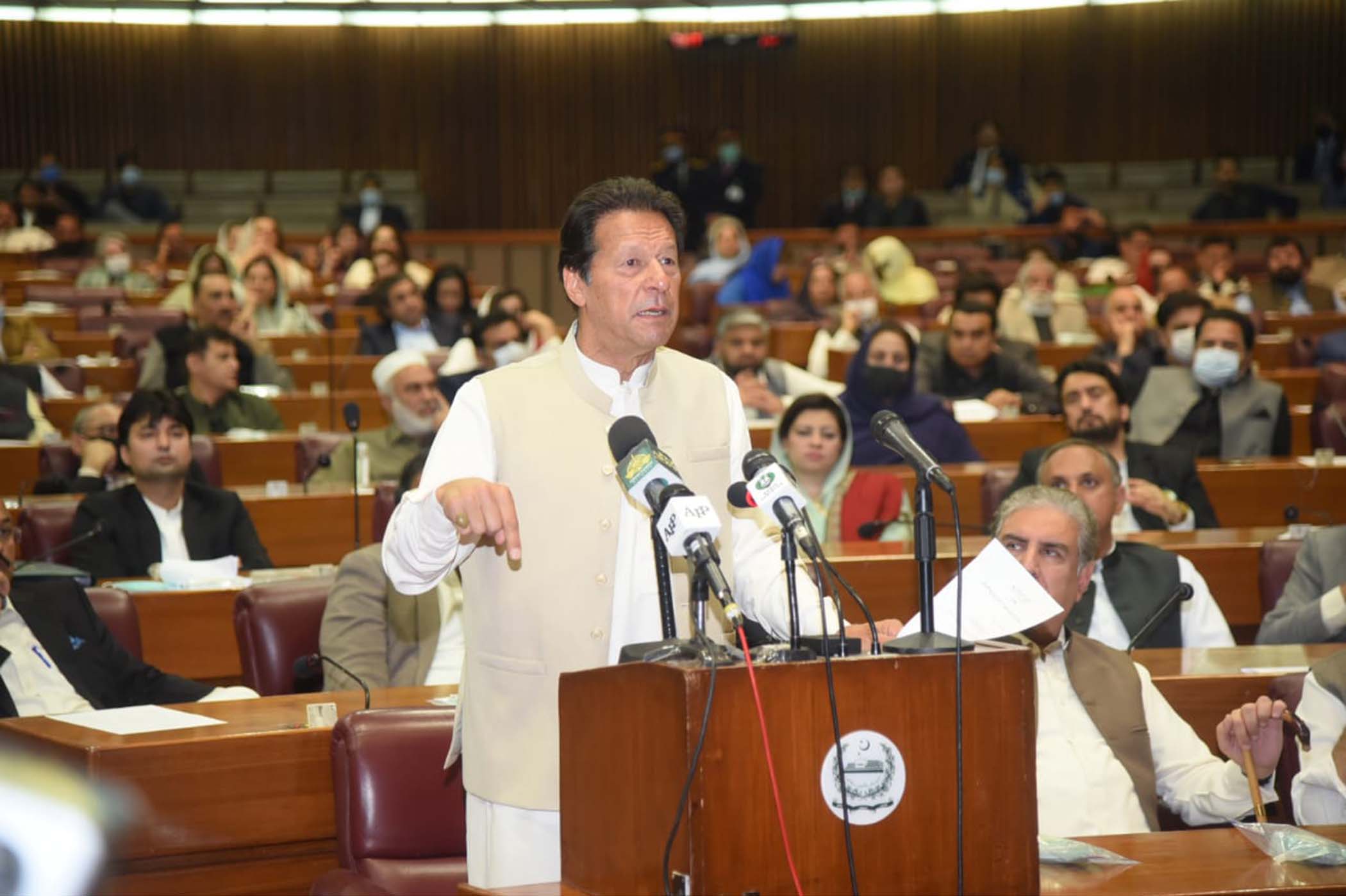 The Khan government, which may face a no-confidence vote in coming days, has been given  a clear message by the Pakistan army chief, Qamar Javed Bajwa, that he should not expect any overt or covert support of army and ISI, for retaining power.

The rapid nosedive of the three-year old Pakistani Prime Minister Imran Khan’s government, which had come to power in 2018 in rigged and manipulated elections, is apparent for all to see, in a few weeks or in the coming month.

It’s existence, however, depends upon two pre-election understandings; firstly, how a caretaker government would be constituted for conducting the fresh polls, and secondly, whether the Pakistan Muslim League- Noon (PML-N) and Pakistan People’s Party (PPP) agree to hold provincial elections simultaneously.

The PPP government in Sindh would like to have a full term ending in July 2023, but would be keen for electoral adjustments with the PML-N, especially on the Pakistan National Assembly (PNA) seats being  presently represented by Khan’s political outfit, Pakistan Tehreek-i-Insaf (PTI).

With the establishment’s neutrality ensured, the opposition parties may be tabling a no-confidence motion once a consensus is worked out among the two major parties, PML-N and PPP as well as the other members of the Pakistan Democratic Movement (PDM) including its chairman, Maulana Fazlur Rehman, who also heads Jamiat Ulema-i-Islam (JUI) about the post-Khan government strategy. In the 342-strong House, PTI has only 156 members, the Khan government depends upon the 21 PNA members of smaller parties. If the reports are true, a sizable number of the PNA members, including a few of the treasury benches, are ready to shift their loyalties, if the opposition tables the non-confidence motion. The government may be toppled without any difficulty.

The fate of the Khan government has reportedly been sealed following a clear message from the Pakistani army chief, Qamar Javed Bajwa, that neither Khan nor his political outfit, PTI, should expect any overt or covert support of army and it’s powerful spy agency, Inter-Services Intelligence (ISI) popularly called ‘establishment’ for retaining power or even in future elections.

Earlier, Khan and his ministers have been boasting that they were on the ‘same page’ with the establishment and their government would not only be completing it’s five-year tenure up to 2023, it would be ruling the country in coming decades too. However, this hybrid government’s poor performance has not only embarrassed the establishment, it is also quite bitter because its failures are being attributed to the GHQ in Rawalpindi. The opposition parties under the banner of the PDM have been making a frontal attack on the establishment accusing Bajwa and the erstwhile ISI chief, Faize Hamid, of imposing Khan on the country by manipulating or rigging the 2018 polls. The anti-establishment speeches delivered during the past two years in different rallies by the country’s top leaders, including the former Prime Minister, Nawaz Sharif, demanding ‘give respect to votes’ have unnerved the establishment. Instead of criticizing the Khan government, the people, especially in Punjab, have been blaming the army for the worsening situation in the country through its proxy rule. The establishment is worried that it cannot afford to crush these sentiments by force, because the army has more than 80 percent soldiers from the province. Also, Nawaz Sharif has a strong following in Punjab. 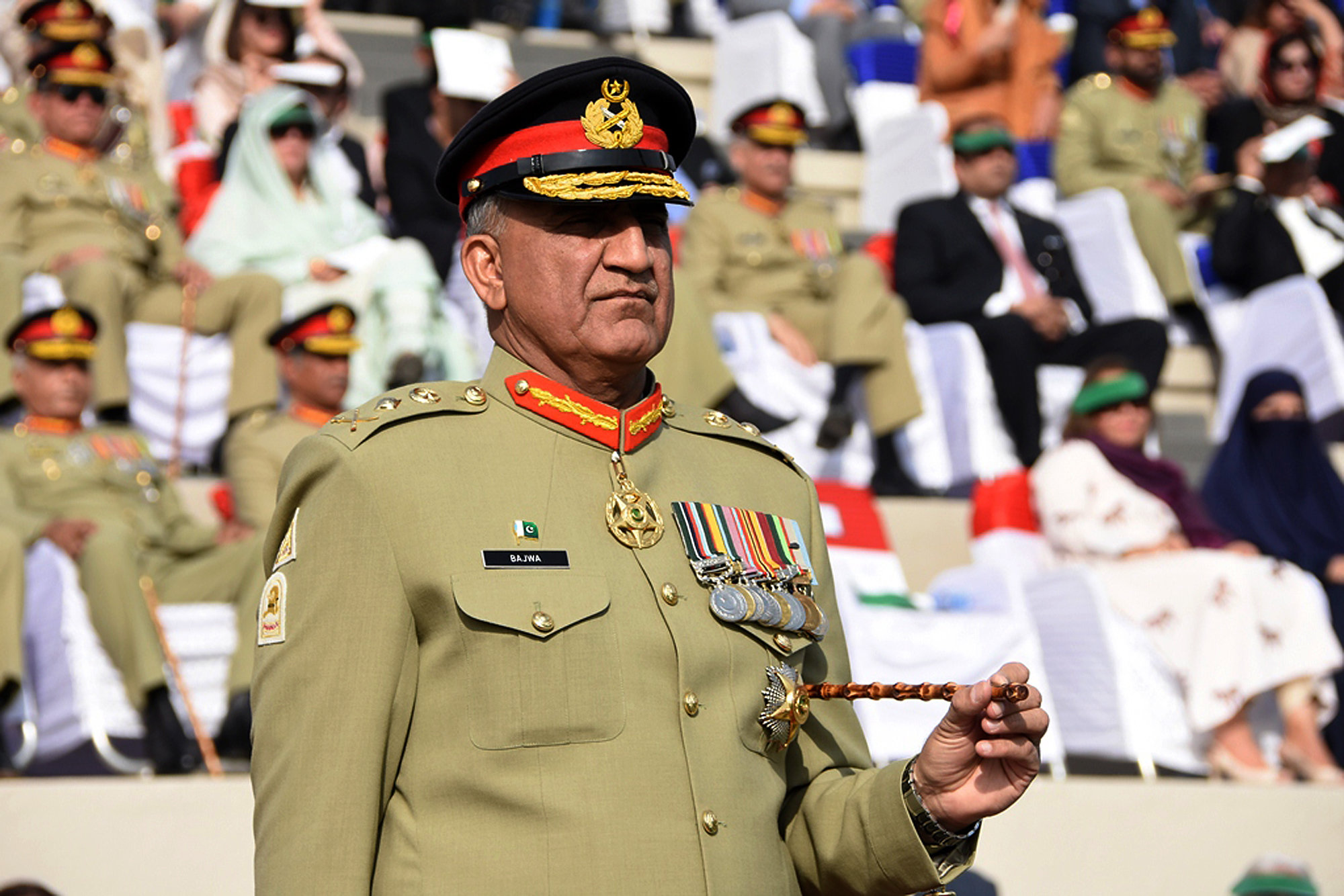 The relationship between Khan and the establishment got further vitiated due to the delay in issuing the notification of the appointment of the new ISI chief during October-November of 2021. Thus, the poor performance of Khan, a cricketer-turned politician, has ultimately forced the establishment to declare that it is now a ‘politically neutral’ institution.

Apart from the armed forces, the higher judiciary too appears to be adjusting itself with the changing political environment. The alleged role of the former Chief Justice of Pakistan (CJP), Saqib Nissar in the removal of the three-time prime minister, Nawaz Sharif, is now in public domain. He had reportedly asked, according to an audio clip, his brother judges during the  2018 elections that neither Sharif nor his daughter Maryam should be released even on bail till elections are over. The issue is now before the Islamabad High Court, which has ordered a forensic test of the audio clip. Thus, Khan’s legitimacy is under scanner.

During the tenure of Raheel Sharif, predecessor of General Bajwa, PTI had received full support of the deep state. In 2014, Khan’s demonstrations and agitations were supported by the army and finally the National Assembly elections were rigged to ensure Khan’s ascendency to power. Earlier, General Raheel, who was denied extension by Sharif, had sent an ISI officer asking the Prime Minister to quit, which he had firmly refused. The establishment took a far reaching decision that it has to project and field non-political outfits to weaken the PML-N and PPP. Since Sharif was a bigger villain, he was to be targeted. Instead of a military coup, it was decided to use the judiciary by implicating him in false money laundering cases..

The country’s docile judiciary is known for endorsing the military coups of Ayub Khan, Zia-ul-Haq and Pervez Musharraf. Zia-ul-Haq had even got an elected prime minister, Z.A.Bhutto, hanged under a trumped up murder charge. Therefore, few were surprised when the ‘dirty role’ of Saqib Nissar was reported.

Earlier, General Faize Hamid, now the corps commander in Peshawar, had ensured Khan’s victory, initially, in his capacity as a senior army intelligence officer and later as the ISI chief. Appreciating his previous role, Khan wants to replace Bajwa by promoting Faize Hamid as the army chief. However, if Bajwa gets extension again in November 2022, all the corps commanders, including Faize Hamid, would retire before his final superannuation. Thus, Khan’s claim of being on the same page is now finally torn off.

Khan’s relationship with the establishment has worsened since the transfer of Faize from the key position as the ISI chief. He had also delayed the notification of his successor, Gen Nadeem Ahmed Anjum, in 2021. Another reason for the establishment’s disillusionment with Khan could be his failure in making the country’s mainstream political parties, PML-N and PPP irrelevant. On the other hand, they have become much stronger due to Khan’s mishandling of foreign as well as the financial policies.

In Pakistan, the future of the elected government depends upon the country’s ruling oligarchy comprising big business, rich landlords and generals who have a genetic distrust towards politicians. It is also known that half-a-century ago, in 1971, the fair and free polls conducted by the then military ruler, Yahia Khan, had led to the secession of its eastern wing, now Bangladesh.

If the establishment allows the democratic system, which has percolated down, especially in the provinces, where like India a share of provinces in the federal taxes has been provided in the present constitution. It has enabled the provinces to serve people in the field of education and health. The military establishment, however, is keen to usurp the funds. It had installed Khan in 2018 with a hope that he would ensure that the province’s share in the financial tax collection is transferred to the establishment for meeting it’s ever-growing expenses, but he neither could serve the people with good governance nor his hybrid regime please the military masters.

The coming months are expected to be quite crucial and challenging for the country, which was once a vibrant prosperous part of the north western region of India. 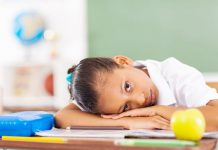 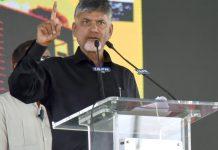